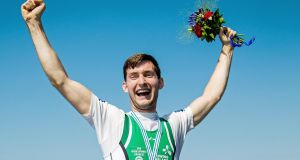 Paul O’Donovan: he and brother Gary want to compete in the lightweight double in Austria

River regattas, featuring mainly junior crews, may not occupy the glamorous end of the rowing spectrum, but they have been the saviour of the sport this year. Big, multi-lane events to be held by Skibbereen and at Lough Rynn disappeared into the inclement air, but Neptune, Commercial and Trinity, and the Limerick and Schools Regatta double bill gave young rowers competition on the water.

This Saturday it is the turn of Portadown and Lee.

Portadown has benefited from what Roby Leighton of the club calls the “explosion of rowing numbers” at junior level. There is an entry of over 300 crews, and for the first time at this regatta time trials will be used to pare down some events before crews get to two-boat racing. The highlight may be the clash of the hosts and RBAI in the junior 18 eights in the final race (7.22pm) of a very long day.

Lee is a 500m non-status regatta at the Marina in Cork city. Again, the big numbers are at underage level – 23 are entered in the junior 18 men’s single scull.

Stepping up a few levels, Ireland will not send a team to Linz in Austria for the second of three World Cup regattas this year. The Ireland team will be sent to Belgrade early next month and Lucerne in July. High-performance director Antonio Maurogiovanni confirmed this to The Irish Times, but did leave a margin for doubt as to whether a crew or crews might be allowed to enter.

Gary O’Donovan has said that he and his brother Paul want to compete in the lightweight double in Austria. Maurogiovanni said he has had discussions with lightweight coach Dominic Casey on the issue. “Nothing has been decided,” he said.

Missing the second World Cup is primarily about saving money. There are more athletes now in the Ireland squad, and costs are consequently higher.

However, Maurogiovanni feels that competing in two World Cups rather than three gives the athletes time to train and work on things between the events, rather than building this part of the season around regular racing.

Ireland will not be sending anyone to the pararowing regatta in Gavirate in Italy this weekend. There will be a test at the Ireland trial next weekend (May 18th to 20th).

The O’Donovan brothers are the subjects of a very watchable Red Bull video The Way of the Wildcard. It can be found on YouTube. For parents it might be worth noting that there is a very brief eruption of strong language.