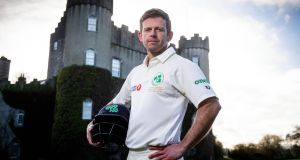 Ed Joyce pictured at Malahide Castle. The 39-year-old left-hander is set to make his Test debut against Pakistan on Friday. Photograph: Ryan Byrne/Inpho

Irish cricket’s elder statesman, Ed Joyce, has one message for his team-mates ahead of Friday’s historic first Test against Pakistan and that’s to enjoy the occasion and soak in everything of what will be an emotional weekend for players and supporters alike.

Ireland’s battle to secure Test status has been hard won and comes with Joyce winding down his playing career just four months shy of his 40th birthday.

Although he still wears the years lightly some 21 summers on from making his debut in a game against Scotland – where he impressed from the start with an innings of 60 – the body has not been as obedient.

His goal of playing in Ireland’s first Test match has kept him going despite retiring from county cricket after 18 years with Middlesex and Sussex in which he scored close to 17,000 first-class runs at a very healthy average of 48.

Joyce’s Irish career has been a two-act masterpiece, broken by a spell with England where his talent was never fully appreciated.

The Bray native’s return to Ireland for the 2011 in World Cup in India and Bangladesh saw the country regain the batting class and sublime cricket brain that has been lauded wherever the game is played.

Having finished up at Sussex, Joyce moved home with his wife Francesca and his two young children and settled in Sandymount, within walking distance of Merrion Cricket Club.

It’s here that the Joyce family sharpened their skills over summers, having moved up from backyard games in Bray involving a large cricket-mad family that includes a remarkable five senior internationals – Ed and his brothers Dom and Gus and twin sisters Isobel and Cecelia.

With injuries having restricted his cricket in the last couple of years, Joyce is used to the questions of what shape he is in, not what sort of nick he’s in with the bat?

“I’m not playing much club cricket at all at the moment, but I go down to Merrion and watch with my kids and everyone’s just ‘how’s the body?, how’s the body?’ So you’re sort of sick answering it but I do understand it,” said Joyce after completing an extensive personal warm-up in Malahide ahead of a net on Tuesday afternoon.

“Look I’ve got loads of little niggles but I actually feel pretty good at the moment, the body is as good as it has been for the last year. Probably the thing that gives the most gyp is my lower back at the moment. The knee’s not too bad, the lower back is a bit stiff all the time so it’s trying to get through that with the batting and fielding and stuff.”

Test cricket provides its own challenges in that respect and with Joyce set to open the batting with skipper William Porterfield, he’s aware that his body could be put under strain, with a cool forecast not helping matters.

“I think the tough thing that I’ve found the last couple of years is fielding and then going straight into bat. So that’s the challenge for me, it could happen in this game, obviously opening the batting and potentially in the field for 100-plus overs – hopefully not, obviously – and then going straight out to bat potentially with a five-minute break. I’ve a routine that I have that takes a bit longer than five minutes but I’ll figure that out as we go along.”

Ireland’s greatest ever batsman – he tops the batting averages and has the highest score – Joyce will make his 151st appearance for Ireland against Pakistan despite a six-year hiatus. His contribution to Irish cricket is truly immense, from helping Ireland qualify for 2007 World Cup with some key innings – Joyce played for England in the tournament – to his mentoring of younger players coming through to the senior team in his second spell in a shamrock sweater.

The one piece of advice he has for his team-mates as he prepares for what may be his final appearance for his country is to soak it all up.

“I think the biggest thing for us is the occasion. I think we’ll control it pretty well but we’ve got to enjoy it. It’s a first Test match, obviously it’s never happened before for the men’s team, it has for the women (his sister Isobel was part of the team that beat Pakistan at College Park in 2000), we’ve got to enjoy the occasion regardless of what’s happening in the game I think, because these things only come around once.”