Niall O’Brien: We are the lucky ones standing on the shoulders of giants

I’ve dreamt of being a Test cricketer 100,000 times. Today my dream becomes reality 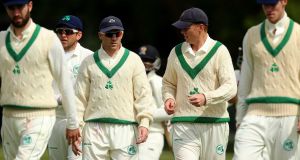 Niall and Kevin O’Brien pictured during the 2015 Intercontinental Cup match against the United Arab Emirates at Malahide in 2015. Photograph: Ryan Byrne/Inpho

The idea that this was going to a normal week of being an Ireland international cricketer didn’t last long and I was up at 6am on Bank Holiday Monday and ready to roll.

I’ve dreamed of being a Test cricketer for as long as I can remember. I must have dreamt the dream 100,000 times. Now that dream is about to become a reality and it’s an incredible feeling for me and my Ireland team-mates as we prepare to walk out this morning to play Pakistan in Malahide.

My wife Rebecca has a busy worklife and she would rather have had a lie-in on Monday, but she could see how excited I was and she put a message on our family WhatsApp group saying I was like a kid at Christmas.

My family understand, they’re all cricket-mad, with Kevin obviously also an Ireland international, while my dad Brendan, or Ginger as he’s known in cricketing circles, played 52 matches for Ireland. Nowadays you could win 50 caps in a couple of years, but it took dad 15.

He and my mother Camilla gave us all so much over the years in pursuing our cricketing careers and my sister Ciara’s international hockey career, where she won 156 caps.

I hope we’ve repaid them somewhat over our Irish careers and they’ve both been there on the great days – at Sabina Park when I enjoyed my day of days in the win over Pakistan in the 2007 World Cup; and also in Bangalore when Kevin broke English hearts and World Cup records in 2011.

From my old man especially, it’s going to be a very, very emotional day to see his two sons hopefully stroll out to play a Test match. Being the quality cricketer he was himself, I’m sure he would have loved the chance to bat for a day and a half to accumulate runs.

Myself and many of my team-mates are probably the last generation that fell in love with Test cricket while watching it on the BBC in those long summers of our childhoods.

We’d watch it from 11 o’clock to one o’clock and when lunch came in the Test we’d be out in the garden in Sandymount, myself and Kev and my other brothers and friends. Out again for 20 minutes during tea and once play finished we went to play till eight of nine in the evening.

Five of the squad have over 200 caps, with Kevin leading the way with over 300 caps. I have 212 myself since my first international coach and cricketing mentor, Adi Birrell, backed my ability when others doubted me back in 2002.

Despite all that experience, it soon became apparent that I wasn’t the only player like a kid at Christmas and when we all met up on Tuesday at Malahide we got to act like kids under the Christmas tree as we opened up the new Test gear, trying on the beautiful new cable-knit sweaters that will come in handy if the Irish weather doesn’t play ball this weekend.

It’s been a bit frustrating not getting all our training sessions in this week and it’s a shame really that Ireland’s early summer came a week early.

Personally I’ve found some form with the bat early in this season, and I’ve made two scores over 150, one with my club Nantwich in the Cheshire League and also for the North West Warriors in the opening interpro game.

I’ll follow my usual routine this morning: bacon and eggs for breakfast – lot of work being a wicket-keeper also – I’ll get stressed about putting my contact lenses in as I always do, but once I get to the ground I’ll just get my kit laid out and get in the nets and get some catches under my belt. Then just get cracking really.

I’ll probably have a bit of Irish music on the dressingroom, a bit of Luke Kelly or Christy Moore – my team-mate Andrew Balbirnie usually puts together a little playlist to get us in the groove.

I’ve played so much cricket with Kev over the years and we normally do our own things on the morning of a match – a quick ‘go well’ being offered when one or other goes out to bat.

But this morning, I think we’ll share a little embrace. Because this will be different, 11 of us will get the honour of being Ireland’s first men’s Test cricketers, joining the 2,826 others who have had the honour going back going back to 1877.

We carry on our shoulders not only the 600-plus men who have played for Ireland, but every coach who has encouraged us; every parent who spent weekends driving us to matches and training; every tea lady who had the sandwiches and cakes ready for us to devour.

It’s as much for them, they’re every bit a part of the long road to becoming a Test-playing nation. It’s time to get going, it’s time to make some history. No nation has won their first Test since Australia beat England in Melbourne 141 years ago – I fancy a crack at that for starters.