Rob Heffernan named as Athlete of the Year 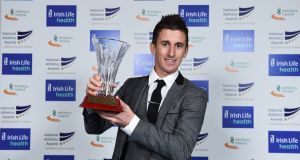 Rob Heffernan was named Athlete of the Year at the Irish Life Health National Athletics Awards at the Crowne Plaza hotel in Santry. Photograph: Sam Barnes/Sportsfile

Not a vintage year by recent standards, and yet in celebrating 2017, Athletics Ireland did get to toast one of the finest moments of its times – a record set 35 years ago and still it seems one for the ages.

It reflected changing times too, because while Rob Heffernan was named Athlete of the Year on the back of his eighth-place finish in the 50km walk at the World Championships in London, it proved to be a particularly lean year on the distance running front.

And that certainly contrasted with the list of achievements being called out ahead of Ray Flynn receiving the Hall of Fame award for 2017, especially his Irish mile record of 3:49.77 set in the summer of 1982, when along with Eamonn Coghlan and John Treacy, Irish distance runners were at the top of the world game.

For Flynn, who turned 60 earlier this year, home is now Johnson City, Tennessee, where he runs a successful athletics agency business. The Longford native was back in Dublin to collect his award which not only recognises that mile record, but also his 89 sub-four minute miles in total, his two Olympic appearances, including the final of the 5,000m in Los Angeles 1984, and not forgetting either his anchor run in the 4x1-mile world record set in Belfield 1985, along with Coghlan, Marcus O’Sullivan and Frank O’Mara – all previous recipients of the Hall of Fame award.

Flynn hasn’t always got the same credit or recognition as those three, yet his 3:49.77 mile eclipses them all – including, just about, the 3:49.78 world indoor mile record which Coghlan ran a year later, in 1983.

That Flynn’s mile record has lasted 35 years is testament to the quality of it, but also perhaps the lack of quality among modern Irish milers: no one has come close to it since Mark Carroll ran 3:50.62 in 2000 and at this rate, it might well last another 35 years.

“Of course I’m still surprised my record still stands 35 years later,” Flynn said of his achievement. “Especially with the rate of good runners Ireland was producing at the time. One of the main reasons I ran so fast was from racing so often at that high level. And that’s what it’s all about – getting into the high-quality races and giving it your best shot.”

This year, Seán Tobin was the sole Irish athlete to run a sub-four minute mile, with his 3:57.00 at the Cork City Sports.

Also present to pick up an award was Gina Akpe-Moses, easily the standout junior of 2017 after winning the 100m at the European Junior Championships in Italy back in July. Brian Gregan picked up the Track and Field award for 2017, after progressing to the semi-finals of the World Championships in London in 45.37 seconds, the second fastest time of his life.

Heffernan, although originally indicating those World Championships in London were likely to be his last championships, is now eyeing up a possible appearance in the 50km walk at next summer’s European Championships in Berlin. He’ll be 40 by then, not that age is slowing him down.