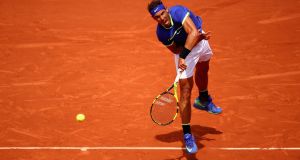 The title favourite maintained his record of never having lost to another Spaniard at Roland Garros with a 6-1 6-2 6-2 victory over 17th seed Roberto Bautista Agut.

Nadal, who lost just one game in beating Nikoloz Basilashvili in round three, has dropped only 20 games in the tournament so far.

That is one more than his best-ever record over four rounds, set here in 2012.

Nadal, who celebrated his 31st birthday on Saturday, has looked supremely confident with his forehand this tournament and it was the same again.

He hit 31 winners in the match compared to just 12 for Bautista Agut and clinched victory after an hour and 50 minutes.

He will next face in-form Austrian, Dominic Thiem, the sixth seed, in a rematch of last year’s semi-final.

The second seed, with new coach Andre Agassi absent from the stands, was too good for the Spanish 19th seed.

The Serb, bidding to become the first man in the professional era to win each of the four grand slams twice, found some resistance in the first set with the third game lasting 13 minutes before Djokovic won it.

“After that (first set) I started playing with fewer errors and that was good. That gave me a lot of confidence,“ Djokovic said in a courtside interview.

He finished Ramos-Vinolas off with a crosscourt forehand winner on his first match point.

“Now it is the quarters in a grand slam and facing Dominic is not easy,“ the world number two said.

“He is a one of the best players in the world, especially on this surface. Now I have a day to rest and get ready.”

Nishikori had been two sets up but Chung fought back and was 3-0 up in the fourth when play was called off.

He said: “I think the rain helps me a lot, because I was really down in the fourth set and mentally I wasn’t ready.

“I knew I had to change something to beat him today, so I think I made some adjustments to make it a little better than yesterday.”

Russian Karen Khachanov became the youngest man to reach the fourth round at Roland Garros since Marin Cilic in 2009 by defeating John Isner.