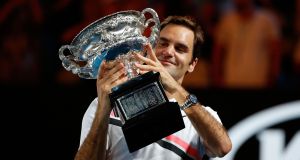 This turbulent Australian Open has been about longevity, endurance and iced towels, three of the defining features of the modern game.

The wonder of Roger Federer’s victory against the 29-year-old Marin Cilic on Sunday was not just that it gave him his 20th major in a record 30th slam final, but that the 36-year-old Swiss fashioned a fortnight of such sweet perfection to get there, spending less than 11 hours on court while his younger rivals laboured in the killing heat for much longer. Cilic clocked up 17hr 3min en route. At the end it showed.

When the heatwave rolled through Melbourne midway through the first week (and returned like an uninvited guest at the finish), the complaints of the suffering players became the coda to the tournament.

Notable was the second-round battle between Novak Djokovic and Gaël Monfils. It lasted only 2hr 45min but the Frenchman said he felt as if he had survived “a small heat stroke for 40 minutes”. Djokovic said he was “right at the limit” of his stamina.

His conqueror in the fourth round, the Korean bull Hyeon Chung, would also fall, retiring with a nasty foot blister after two games of the second set in his semi-final against Federer. Nobody, it seemed, was immune – young or old, male or female. Except one man: the champion.

In the women’s draw the three-set formula saved most players from enduring too much pain – indeed, a dozen matches did not last an hour, and most finished in less than two – but there were exceptions, and they hit those players who would feature in the finish.

The 3hr 44min of the third-round match between Simona Halep and the young American Lauren Davis might have been as hard to watch as it must have been to play – and the Romanian winner would pay a price for her courage. By the time she reached Saturday’s final against the Danish grinder Carolina Wozniacki, she was red-lining. That night she spent four hours in hospital, recovering from dehydration.

The match had dragged the last drop of commitment and sweat from both of them, Halep needing a courtside health check in the second set after looking ready to topple over; she somehow recovered to level at a set apiece. It proved to be a chimera.

After two hours in sweltering heat, Wozniacki brought the crowd to their feet with a volley to end a 23-shot rally in the third game of the deciding set. She was breathing hard – and double-faulted to drop serve. In 2014, the Dane ran the New York marathon in 3hr 26min – 18min less than it had taken Halep to defeat Davis.

There was not a single serve and volley point from either player, with the workload spread overwhelmingly across the baseline, where 226 points were won and lost. When she was broken in the seventh game, Wozniacki called for the physio to work on her left knee. It might have been that her entire engine was seizing up. But she outlasted her weary adversary, whose last shot, after many glorious ones, was a lame backhand from mid-court into the net.

They had played for 2hr 49min – exactly the time it took Victor Troicki to defeat Alex Bolt over five sets in round one. The last set of the final took 71minutes – exactly the time it took Halep to beat Karolina Pliskova in the quarter-finals. The 2hr 22min it took Halep to beat Angelique Kerber in the semi-finals was two minutes less than her third set against Davis. The more it matters, the more time becomes irrelevant.

Ultimately, though, this is what they train for – as Kyle Edmund pointed out. Even when a hip injury cut him down in his semi-final against Cilic, he dismissed it as “one of those things”. When asked about the heat, he delivered perhaps the quote of the tournament: “It’s a professional sport. It’s meant to hurt. It’s not meant to be easy.”

As a tearful Federer showed after he had subdued a fighting Cilic on Sunday, that is what makes it all worthwhile.