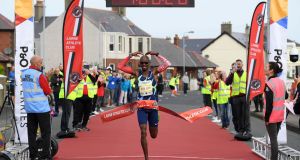 Billed as the fastest half marathon route and field on the island of Ireland, the 13.1 miles down along the Antrim coast duly delivered a series of records on Saturday morning, if not quite the big one.

While Britain’s Mo Farah took the victory in 60 minutes and 31 seconds, short of his own British record of 59:32, Stephen Scullion did run the fastest half marathon by any Irish runner on the island of Ireland with his 61:12 in fourth place.

That improved Scullion’s previous best 63:36 by some distance, his 61:12 also a new Northern Ireland record for the Belfast runner, though it was outside the current Irish record of 60:49 set by Alistair Cragg in 2011. Previously, the fastest run on the island of Ireland by an Irish runner was the 62:29 clocked by Jerry Kiernan back in 1982.

Kevin Seaward, who like Scullion has already qualified for the Tokyo Olympic marathon, postponed into 2021, also improved his best to 63:09 in fifth, an improvement of exactly half a minute. Britain’s Lily Partridge took the women’s race in 71:09.

Also continuing his relentless record-breaking run was Tommy Hughes, the 1992 Olympian in the marathon, who ran a world over-60 half marathon best of 71:09. Last month, Hughes also broke the over-60s world record for running 15km, the Derry runner clocking 51:30 in Letterkenny.

Farah didn’t have it all his own way, shadowed up until the last two miles by Scullion and also Britain’s Marc Scott, who took second in 60:43, with Ben O’Connor third in 63:09.

Although now aged 37, Farah is showing little signs of slowing down. Last Friday week, at the Brussels Diamond League, he set his first official outdoor world record on the track, improving the one hour running mark with his total of 21,330 metres, which beat Haile Gebrselassie’s previous record by 45m, set back in 2007.

Originally meant to be a mass-participation race last March, Covid-19 meant Saturday’s race was elite only, and travel restrictions had further restricted the chance to bring in pace-makers with the ability of taking Farah to sub-one hour pace.

Elite race organiser James McIlroy, the Larne runner who represented Ireland and then Britain over 800m, praised his fellow organisers for what was one of the first elite sporting events in the province since the lockdown:

“After all that’s gone on around Covid-19, it’s about doing something for the community, and we’ve had great support from the local council, from Northern Ireland athletes, from Irish athletes, English athletes, they’ve all bought in.”