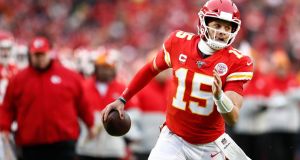 Patrick Mahomes is reported to have signed a new 10-year deal with the Kansas City Chiefs worth $400 million. Photograph: Larry W Smith/EPA

Terms of the deal were not disclosed, but Adam Schefter reported the deal is worth more than $400 million (€353.75 million) and the “richest contract in NFL history”. That would also make his total contract the largest in the history of North American team sports.

Mahomes, 24, was the NFL Most Valuable Player in 2018 and guided the Chiefs to a Super Bowl victory last season.

Prior to the Chiefs’ monumental win in February, Chiefs chief executive Clark Hunt said the quarterback would be with the team long-term.

“There will be a right time sometime in the next 12 to 15 months to extend Patrick, and when I say right time, I mean right time for both the player and the club,” Hunt said before Super Bowl LIV.

“I don’t want to say necessarily it has to be this off-season, but I will say that it’s a priority to get him done. I hope Patrick is here for his entire career, and that’s going to be our goal.”

If he stays 12 seasons, Mahomes will earn at least $427.6 million (€378 million), surpassing the 12-year, $426.5 million (€377 million) contract signed by Los Angeles Angels outfielder Mike Trout in March. At the time, Trout’s contract was the largest ever in North America.

Previously the NFL’s highest-paid quarterback was Russell Wilson of the Seattle Seahawks, who signed a four-year, $140 million (€124 million) deal in April 2019 for an annual average value of $35 million (€31 million). His contract includes $107 million (€94.6 million) guaranteed and Wilson turns 32 in November.

Mahomes’s agreement with the Chiefs is the first to exceed 10 years in the NFL since Donovan McNabb with the Philadelphia Eagles in 2002.