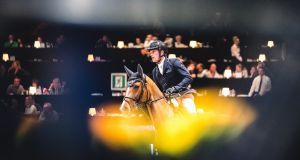 Ireland’s top-rated show jumper, Darragh Kenny, won the feature class in Wellington, Florida on Saturday as action continued behind closed doors at the Winter Equestrian Festival which is due to conclude on Sunday, two weeks ahead of schedule.

Forty-five riders lined out for the three-star Horseware Ireland Grand Prix with 12 of these going clear over the 1.50m first round track designed by Canada’s Michel Vaillancourt. Returning as one of the last to go in the jump-off, Offaly native Kenny stopped the clock on 33.54 to win with Vlock Show Stables’ Scarlett du Sart Z ahead of Israel’s Sydney Shulman on J-Boston SE (33.96) and the USA’s Spencer Smith riding Theodore Manciais (34.87).

Kenny got the ride on Scarlett du Sart Z, a 2010 Zangersheide mare by Stakkato de Hann during the horse’s seven-year-old year. “This is a mare that Teddy Vlock and his owner bought for me, and we’ve been slowly producing her,” commented the rider. “She’s really starting to turn a corner, and I think she’s an incredibly talented horse that will end up jumping at the highest level.”

Week 10 of the WEF at the Palm Beach Equestrian Centre started with a win for Ireland in Wednesday’s 1.45m two-phase class through Wexford’s Bertram Allen with Ballywalter Stables’ Lafayette van Overis. “I put him up and down the levels a bit, but he is very comfortable at this 1.45m level,” Allen said of the nine-year-old Belgian Warmblood gelding. “My goal is to get him this competitive at 1.50m and then we will see where he goes.”

Also in Wellington, but at Deeridge Farm where Co Tipperary’s Alan Wade is course designer, there were two wins for Ireland, and Derry, on Friday.

Because of coronavirus restrictions, the curtain has been brought down early at two of the major spring tours in Spain where there were large Irish contingents in action.

There is also three-star dressage taking place at Dortmund where Co Kildare’s triple Olympian, Heike Holstein, placed sixth on Sambuca (70.571%) in Friday’s Grand Prix which was won by Germany’s European eventing team and individual champion, Ingrid Klimke, riding Franziskus 15 (75.217). Holstein and her home-bred mare are due to line-out in Sunday’s Grand Prix Special.

At home this weekend, Dressage Ireland cancelled all regional competitions and has already decided to cancel the national winter championships which were due to take place at Cavan Equestrian Centre over the weekend of April 4th and 5th. Show Jumping Ireland has cancelled all stand-alone and league shows up to and including March 29th while the Association of Irish Riding Clubs, the Irish Pony Society and the Irish Pony Club have also suspended all national and regional activities until the same date.

A two-phase event was staged on Saturday at Tyrella but two Eventing Ireland has cancelled the two one-day events due to take place at the Co Down venue in March, as is the case with EI events in the rest of the country until the end of the month. Cancelled too is the Event Riders Race, a major high-performance squad fund-raiser which was due to take place at Dundalk racecourse on Wednesday, April 15th.

1 Malachy Clerkin: Sleep well Jack, you made us all happy
2 Ken Early: Another Mourinho masterclass in going through the motions
3 The Offload: All eyes on Leinster’s academy intake
4 All in the Game: Jack fact-cheques money story
5 David McGoldrick reveals racist messages received online
Real news has value SUBSCRIBE