Novak Djokovic sets up US Open showdown with del Potro 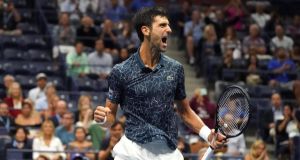 Serbia’s Novak Djokovic reacts after his win against Japan’s Kei Nishikori during the men’s singles semi-finals match at the 2018 US Open. Photo: Timothy A Clary/Getty Images

Not long after Rafael Nadal had to quit against Juan Martin del Potro with a knee injury, Novak Djokovic inflicted more conventional pain on Kei Nishikori in straight sets on Friday night to reach the US Open final for the eighth time.

The remarkable Djokovic, who lost on his last visit to the final two years ago to Stan Wawrinka, has won the title in New York twice, against Roger Federer in 2015 and Nadal in 2011, the best season of his career.

Arthur Ashe Stadium had not long emptied, stunned by the retirement of Nadal after two sets, when Djokovic put Nishikori under immediate pressure in the second semi-final. Nishikori had to save four break points before dropping his serve at the first time of asking. He gave what he had but Djokovic was pulling away at the end, winning 6-3, 6-4, 6-2. It took him two hours and 23 minutes – only 22 minutes longer than Nadal kept Del Potro interested, before an emotional withdrawal in the first semi-final.

“I came out of the blocks with great intensity and focus,” Djokovic said immediately afterwards.

A couple of times during the heatwave that gripped this tournament in the first 10 days or so, he has looked to be suffering badly. But in the cooler conditions at the end, he has prospered again.

Djokovic has now beaten the gifted but physically fragile Japanese player 14 times in a row since losing to him in the semi-finals here in 2014, when Nishikori went on to lose to Marin Cilic in the final. Nishikori beat the Croatian in their rematch in the quarter-finals this time.

Djokovic’s most recent win over Nishikori was in the quarter-finals at Wimbledon this summer, on his way to winning the title.

It took Nishikori more than a quarter of an hour to get on the board on Friday, but, on a night when injury was the talking point, he pulled up dramatically mid-point in the ninth game, grabbing at his right leg, before holding to keep the set alive at 3-5. If there was a trophy for injuries, Nishikori and Nadal would probably make the final every time.

Djokovic looked well in command taking the first set before they then settled down to a string of close rallies until he broke again in the fifth game of the second, serving out the frame. Yet this was Nishikori’s best stretch: winning the point on 14 of 15 visits to the net and hitting 12 clean winners. It still wasn’t enough, and Djokovic finished it style, hitting a remarkable backhand winner into the corner from well out of court.

If Djokovic beats Del Potro to win his 14th slam, he moves alongside Sampras and will sit three behind Nadal and six behind Federer. After losing the first three matches of his comeback this year, he has gone on to reach the quarter-finals at Roland Garros, lose to Nadal in the semi-finals in Rome and in the Queen’s final to Cilic, before beating Kevin Anderson in the Wimbledon final.

He has resurrected his career impressively after minor surgery on his long-term elbow injury, which kept him out of the game for six months last year. This is not vintage Djokovic just yet, but he is still good enough to win at the highest level. – Guardian service