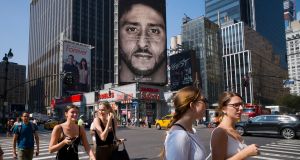 People walk by a Nike advertisement featuring Colin Kaepernick in New York. The slogan reads: “Believe in something. Even if it means sacrificing everything.” Photograph: Mark Lennihan/AP Photo

Will Nike ever leave skin in the game? On Sunday, Shaquem Griffin, linebacker with the Seattle Seahawks, will make history when he becomes the first one-handed player to ever start in an NFL game.

The Floridian’s story is powerful. He was as gifted an athlete as his twin brother, Shaquil, but had to have his left hand amputated at the age of four. Both boys excelled at high school football and Shaquil refused to accept a scholarship to Central Florida unless the offer included his brother. Again, both Griffins excelled, with Shaquil declaring for the NFL draft last year.

This summer, Shaquem was drafted in the fifth round, spent the summer in the tortuous grind for a contract and did enough to prove his worth to Pete Carroll. Griffin is among the faces to feature in Nike’s new advertisement, the latest in their range of moody, cinematic pieces containing an inspirational message. The company’s superstar faces – LeBron James and Serena Williams – make fleeting appearances but the theme revolves around athletes who have overcome extraordinary adversity.

“So don’t ask if you’re dreams are crazy. Ask if they are crazy enough” is the concluding line after a kaleidoscopic imagery of dazzling athletic endeavour. The narrator reveals himself at the end: Colin Kaepernick, the former NFL quarterback locked out of the league since “taking a knee” during the national anthem prior to league games. Kaepernick, who led the San Francisco 49ers to the Superbowl game in 2013, is taking a legal case against the NFL which alleges collusion on the part of team owners to effectively black ball him from getting another contract. In March, Nike and the NFL announced a new eight-year deal in which the sportswear giant would supply all teams with gear and sideline apparel.

It’s an audacious move by Nike and one which seems to have confused practically everybody. In the 1980s, when Nike was still the rising star of sports shoes, American materialism was summed up in the myth that on the streets, people were being murdered for their Air Jordans, the shoe that transformed Mike into a brand monster. Their latest advertising stunt generated a backlash that they must have anticipated, with the #justburnit hashtag prompting customers to burn their expensive swoosh-logoed shoes, #boycott Nike lighting up Twitter and the company stock dipping by 2 per cent when the advertisement was announced.

Believe in something. Even if it means sacrificing everything. #JustDoIt pic.twitter.com/x5TnU7Z51i

At the heart of this is Colin Kaepernick, who, at 30, may well have played his last game of professional football because of his political principles. The background argument as to whether Kaepernick’s “numbers” add up to starting quarterback position is besides the point. Kaepernick was in the league; established and a big name until he decided to start kneeling in a protest against police brutality towards black American citizens.

Among his most vociferous critics has been Donald Trump, who, in a generalised diatribe towards NFL conscientious objectors, expressed the wish that the league owners would “get that sonofabitch off the field”. Kaepernick, the leader, is gone from the game and his legal team intends arguing that the NFL collusion is a consequence of Trump’s displeasure. Despite the general pandemonium within his staff this week, Trump took time away from some urgent swamp-draining to tweet one of his more lucid messages of recent times: “What was Nike thinking?” he mused, a la David Brent, before returning to wage war on the media,

The answer is probably that Nike’s thinking was that it would be great if they could get the president of the United States to use their name in messaging his 54 million followers. In the cut-throat global competition for consumer attention, it is hard to come up with an advertising campaign that catches the eye and starts conversations. Nike have been shrewd and original in the hitching their logo to causes and issues with breathtaking insolence and shamelessness.

Controversial adverts have become part of their culture. It was Nike who had Tiger Woods talk about being turned away from country clubs. It was Nike who had Charles Barkley grouch that he was no role model. It was Nike’s “What Will They Say About You?”, depicting women athletes in the Middle East pursuing athletic freedom in a combination of hijabs and, well, Nike gear, a campaign that drew praise and derision and equal measure.

Nike’s advertising, going back to their iconic Jordan series, has helped them to retain their upstart edginess despite becoming a global monolith. The best of their advertising is brilliant. But the appropriation of Kaepernick as part of their corporate message brings them into new country. Last week, when Kaepernick was shown on the in-house video board at the US Open tennis in Flushing Meadows, spontaneous applause broke out. His stance has been formidable: he has been steadfast in his refusal to be interviewed to elaborate on his protest until he accepted an Amnesty International Award in April, when he pointed out that Eric Reid, the 49ers team-mate who quickly joined his protest, had suffered the same fate as he did and reminded the public that the protest was against “ a system that wants us to hate ourselves”.

Because the Kaepernick protests took place during 2016, when Trump and Clinton were warring over what America would become, the athlete (himself mixed race) has become emblematic of the conflicting attitudes on race and tolerance that are threatening to rip that society apart. American football is the heartland sport: its fan base is more than 80 per cent white and predominantly Republican, and football is the chief pastime and interest in the Bible and Rust belt states that ushered Trump’s shock victory that November.

Activism against Trump has become commonplace in American sport: in June, the Philadelphia Eagles had their invitation to the White House rescinded when it became clear most of the team intended boycotting it. But only Kaepernick has been actively ousted from his sport. It has to be presumed that his contract with Nike will return at least a little of the millions in lost earnings. Whatever the company has paid him was worth it: latest estimates are that the advert has generated $163 million of media exposure. So in the short term, the commercialisation of the Kaepernick stance has been a spectacular success.

But once the impact of the ad wears off, Trump’s addled tweet remains pertinent. Where does Nike ultimately stand on this? How can they at once laud Colin Kaepernick and still act as the NFL’s official partner and declare anything other than cynicism. “Believe in something. Even if it means sacrificing everything,” reads the slogan for the close-up poster of Kaepernick’s face.

If the company proves willing to cut its contract with the NFL to back their man, then fine: be like Nike. Otherwise, this may be the campaign that makes the world remember that the swoosh sign stands for nothing, nothing at all, not even when America is burning.