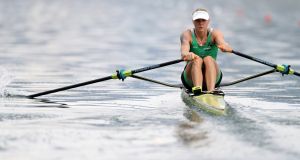 Ireland seriously boosted their chances of qualifying five boats for the Olympic Games with another fine set of performances in quarter-finals here at the World Rowing Championships in Linz-Ottensheim, Austria.

Single sculler Sanita Puspure and the men’s lightweight double both won and the women’s pair and men’s double took second places to move confidently into semi-finals. This puts these crews into the top 12 at the regatta. In the case of the double and the pair, 11 of those 12 will book places in Tokyo. Puspure needs to finish in the top nine and the lightweight double of Paul O’Donovan and Fintan McCarthy need to take a top-seven place – they look well on course to do this.

On Thursday the women’s four go in their semi-final. If they reach the A Final (the top six) they book a Tokyo place for the boat. Two more places are available in the B Final.

Puspure’s performance was the standout of the day here. The word dominant was applied a little to closely to Puspure last year, but she does court it when she produces performances like this.

The reigning world champion won by more than 15 seconds – in the fastest time of the day. It was hard not to think she was making a point, especially as Mirka Topinkova Knapkova, the former Olympic champion, was the one left behind in second place.

O’Donovan and McCarthy continued their winning run. Spain led through to the 1,500 metre mark, with Ireland and Poland close behind and overlapping them by this stage. Ireland moved into a small lead and held on to it.

The Ireland women’s pair of Aileen Crowley and Monika Dukarska paddled back to applause after their quarter-final. They had won a battle with Italy to take second, and a good lane draw in the semi-final. Australia’s Jessica Morrison and Abbabelle McIntyre had won well, looking good tips for a medal. But it is all to play for.

The Ireland double scull of Philip Doyle and Ronan Byrne were firmly in the top three position for most of their quarter-final, while Germany and Poland had also moved clear of the rest. Poland made a bid to break away and succeeded, even as Ireland passed Germany and drove at the leaders. The Poles stayed clear and Ireland qualified for the quarter-finals in second place.

To finish off the day for the Irish, Gary O’Donovan added a new chapter in the O’Donovan epic tale of sprint finishes. With just 500 metres left in his quarter-final of the lightweight single sculls (a non-Olympic event) he was lying in fifth, with Sean Murphy of Australia leading and Serbia’s Milos Stanojevic second. But the Skibbereen man is used to this. Canada’s Aaron Latimer charged past Murphy, and O’Donovan just about matched his speed to take out Stanojevic, who did not have the finishing speed of his rivals.

The one Ireland crew in an Olympic class not to make it through were the women’s lightweight double of Aoife Casey and Denise Walsh. They are an all-Skibbereen unit, so they will battle to the line. They did this in their quarter-final, but it was to take fourth from Poland in a sprint finish. Britain had a surprisingly easy win, while Casey and Walsh were out of the top three from early on.

Ireland’s Katie O’Brien, a pararower, got her World Championship challenge off in excellent fashion. She finished third in her preliminary race in the PR2 single sculls – in a race in which the winner, Kathryn Ross of Australia, set a new world’s best time (9:24.99). O’Brien also set a new personal best.