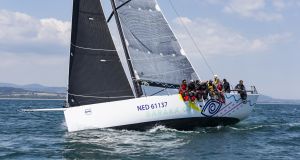 The crew of Baraka Gp, skippered by Niall Dowling, celebrate the line honours win in the Volvo Round Ireland Race. Photograph: David Branigan/Oceansport

A waiting-game is underway in the Volvo Round Ireland Race following the line honours win for Niall Dowling’s Baraka Gp that crossed the finishing line of the 705-mile race almost four days after starting last Saturday.

First boat home has been decided but this 20th edition of the biennial race has so far appeared to favour a small boat win meaning many of those still at sea are contenders under the handicapping system.

But winds have slackened on the north coast and the notorious tides have taken hold and Baraka’s pace may yet be enough to secure the overall win as well.

Still Baraka Gp’s skipper was being cautious on the Wicklow Harbour quayside shortly after coming ashore,

“I think we’re fighting against the clock given that we’re a large(r) boat and this is going to be a small-boat race,” Dowling said ashore at Wicklow Sailing Club. “It’s been 10 years since I did the race and I won’t leave it as long next time!”

Depending on weather conditions, the main fleet is expected to start arriving back in Wicklow from lunchtime on Thursday and continue right up to the scheduled start of the prize-giving at 6pm on Friday.

A total of 46 boats remain at sea from the original 56 starters.