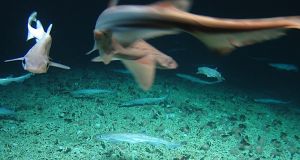 The discovery of the shark nursery was made last July by the Marine Institute’s remotely-operated vehicle Holland 1 deployed from the ILV Granuaile. Photograph: Marine Institute/Geological Survey of Ireland 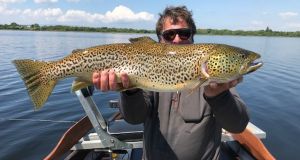 Basil Shields with the 11lb 3oz trout he caught in Ballynalty Bay on the Corrib in May.

A team of marine scientists have discovered a very rare shark nursery 200 miles west of Ireland while investigating Ireland’s deep-ocean territory. The announcement was made at the recent Infomar seabed mapping seminar in Kinsale, where video highlights of this rare occurrence were debuted.

The discovery was made during the “SeaRover” survey last July by the Marine Institute’s remotely-operated vehicle Holland 1 deployed from the ILV Granuaile.

A large school of blackmouth catsharks (Galeus melastomus), abundant in the northeast Atlantic, were present at the site, and it is likely the eggs are of this species. A second, more unusual species, the sailfin roughshark (Oxynotus paradoxus), was also observed.

The sailfin is listed as “near threatened” by the International Union for Conservation of Nature, meaning it may be considered threatened with extinction in the near future.

The species grows to a length of 1.2m and is usually observed moving slowly with deep-water currents, feeding on small benthic invertebrates. The individual sighted may have been feeding on the eggs, although this was not observed by the science team.

“No pups were obvious at the site and it is believed that the adult sharks might be utilising degraded coral reef and exposed carbonate rock on which to lay their eggs. A healthy coral reef in the vicinity may act as a refuge for the juvenile shark pups once they hatch.

“It is anticipated that further study of the site will answer some important scientific questions on the biology and ecology of deep-water sharks in Irish waters,” explained David O’Sullivan, of Infomar and chief scientist on the SeaRover survey.

The exploration initiative was a collaboration jointly funded by the Government and the European Union’s European Maritime and Fisheries Fund, supported by the Marine Institute, NPWS, Geological Survey Ireland and NUI Galway.

Peter Mantle has stepped down as owner of the Delphi Club in Abaco, in the Bahamas. While some may have been aware of a change in the offing, this has now officially happened.

However, the new owners, ie Andrew Tucker, chairman, and Robert Ford general manager, are determined to follow the same path Mantle trailblazed over the past 10 years.

The incoming team are anxious to welcome repeat visitors who will find much that is familiar but also some modest improvements. Feedback on other ways to improve Delphi would be most welcome.

‘Strongest-fighting fish I ever played’

One of the highlight of last season’s trout fishing was undoubtedly the huge fish caught by renowned fishing guide and instructor, Basil Shields from Oughterard, Co Galway. Fishing in Ballynalty Bay on the Corrib in May he caught a magnificent trout of 11lb 3oz on a size 10 holographic buzzer on the point using 6.6lb frog hair.

“The fish took one hour and 20 minutes to land. The strongest-fighting fish I have ever played. I have had three bigger ones, two at 11lb 4oz and one at 12lb 5oz but by far this was the strongest fish. The fish was weighed and safely returned to the lake,” he said.

Fifteen anglers signed in for the third heat of the Annamoe winter league last weekend. The last two hours of the competition were dry and this was welcomed by competitors. The trout also showed their appreciation for the conditions as they began to feed on the surface.

Waterford Trout Anglers’ Association held its annual Knockaderry Cup competition over the bank holiday weekend at which 30 anglers caught 28 trout including some browns up to 2.5kg.