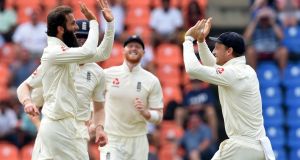 The mercurial Moeen Ali, world-class all-rounder one day, wayward talent the next, yet a rock-solid team man every day of the week, took the vital wickets on the final morning to enable his side to win the most beguiling of Test matches.

England won by 57 runs and therefore secured the series with one match to play in Colombo; it was the first time they have won a Test without a pace bowler taking a wicket since the Old Trafford match against Australia in 1956, when the wickets were shared by Tony Lock (1) and Jim Laker (19). In all, 38 of the 40 wickets fell to spinners in Pallekele, which has never happened before in a Test match.

From an English perspective, the last rites were conveniently short of tension. Only 31 minutes were required to take the last three Sri Lankan wickets. They added 17 runs when 75 were needed.

Joe Root kept faith with his spinners. In England’s last overseas victory in Chittagong over two years ago, Alastair Cook tossed the ball to Stuart Broad and Ben Stokes when the match was in the balance. But here the ball was turning more than in Chittagong. Moreover, Root has more confidence in his spinners now than Cook did then. Moeen and Adil Rashid were playing in Bangladesh with Gareth Batty as the third man. Here, of course, Jack Leach accompanied Moeen and Rashid and no one begrudged him the final wicket, which allowed him to post his first five-wicket haul in Test cricket (5-83). He is no magician but his steadiness – and left-handedness – offers a welcome contrast to the other two. Leach’s experience at Taunton on turning pitches has taught him the virtues of patience and perseverance.

However, it was Moeen who took the crucial wicket on Sunday morning. Sri Lanka’s hopes rested with Niroshan Dickwella, an impish left-handed batsman and a brilliant reverse sweeper, who had raced to 27 at the close of play on Saturday. Alongside Akila Dananjaya he had enhanced Sri Lanka’s total by 14 runs, mostly from singles, mostly from reverse sweeps.

Then everything clicked for Moeen; he can be as streaky as a bowler as a batsman. An enticing off-break dipped in the air and turned sharply. Dickwella’s attempted drive sent the ball to Ben Stokes at first slip. Perhaps he should have kept sweeping everything. Suranga Lakmal, the pace bowler who took a wicket in this match, only lasted two balls but there was no real disgrace for a tailender in his dismissal. Bowling around the wicket, something which Moeen was slow to do on Saturday afternoon against Angelo Mathews, he pitched the ball six inches outside off-stump. Once again the ball turned sharply and passed through Lakmal’s gate to clip off-stump. Only the formalities remained. Malinda Pushpakumara drove so limply back to Leach the umpires were minded to check it was not a bump ball. It wasn’t and hands were shaken.

Sri Lanka may not be the best team on the planet but to register a series victory on their soil – with a match to spare – is a considerable achievement. Bear in mind this was way beyond the scope of South Africa and Australia in recent times, though not India. It was an immensely satisfying victory for Root and a source of further bewilderment to the trigger-happy who were calling for the premature removal of Trevor Bayliss as England’s Test coach six months ago.

There has been a fresh flexibility and freedom about England’s play and a sense of enjoyment that has not been so evident on recent tours - mind you, that is a hundred times easier in a winning side. They are now more likely to take the bold option at the crease, and this may also have been evident in the field with Root’s determination to stick exclusively with his relatively unproven spinners even when the Sri Lankans were building threatening partnerships. And in the heat, the energy of all 11 out on the field never faltered.

After two Tests here, the jigsaw, though far from complete, is not missing as many pieces. The opening batsmen had one excellent game each; the spinners may deliver the odd loose spell but they are gaining confidence, albeit in helpful conditions. The presence of the reliable Leach has enhanced Moeen’s effectiveness with the ball now he is no longer required to bowl because somebody has to and it is his turn.

So everybody is beaming as the team heads to Colombo; this is the first time in 13 attempts that England have been victorious in all three formats overseas. It is possible they could play the same side for the third Test in a row. Much will depend upon the side strain that kept Sam Curran from the field in the last two days. But on this tour, England have an unusually handy bench. Stuart Broad, Jonny Bairstow and Chris Woakes are all bursting for a game.