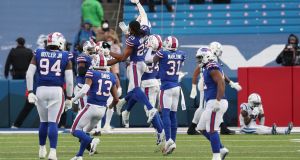 Josh Allen passed for 324 yards and two touchdowns and ran for another as the second-seeded Bills recorded their first playoff victory since 1995 with a 27-24 win over the visiting and seventh-seeded Colts in an AFC wild-card game in Orchard Park, New York.

Stefon Diggs caught six passes for 128 yards and a touchdown, Dawson Knox also had a scoring reception and Tyler Bass kicked two field goals as Buffalo snapped a six-game postseason skid. The Bills’ opponent in the divisional round will be determined on Sunday.

Philip Rivers completed 27 of 46 passes for 309 yards and two touchdowns for the Colts. Jonathan Taylor rushed for 78 yards and a score on 21 carries while Jack Doyle and Zach Pascal caught scoring passes. The Colts took possession with 2:30 left for a final gasp and Rivers later hit a sliding Pascal for 17 yards on fourth down to the Bills’ 46-yard line. Indianapolis couldn’t move any closer and Rivers’ final-second Hail Mary pass was broken up by the Bills’ Micah Hyde.

The Bills held a 24-10 lead after Allen, who was 26-for-25 passing, connected with Diggs on a 35-yard scoring play with 14:10 left in the contest. The Colts answered with Rivers’ nine-yard touchdown throw to Pascal, but an ensuing two-point run by Taylor failed and left Indianapolis trailing 24-16 with 11:32 left. Bass boomed a 54-yard field goal through the uprights to make it an 11-point margin with 8:08 remaining. But the Colts quickly moved 76 yards on five plays with Rivers hitting Doyle on a 27-yard scoring pass and on the ensuing two-point conversion to move within 27-24 with 6:13 left.

Cam Akers rushed for 131 yards and a touchdown and Darious Williams returned an interception for a score as the sixth-seeded Rams upset the hosts and third-seeded Seahawks in an NFC wild-card game.

Jared Goff, who suffered a fractured right thumb at Seattle two weeks ago that required surgery, came off the bench to guide the Rams, throwing a 15-yard touchdown pass to Robert Woods with 4:46 remaining to help clinch the victory. Goff was nine of 19 for 155 yards in place of starter John Wolford, who suffered a neck injury in the first quarter and was taken to the hospital.

Seahawks quarterback Russell Wilson was 11 of 27 for 174 yards and two touchdowns, both to DK Metcalf. Wilson was sacked five times, twice each by Aaron Donald and Leonard Floyd, and the Seahawks converted just two of 14 third-down attempts and mustered just 278 yards of total offense.

Tom Brady threw for 381 yards and two touchdowns to propel the visiting Buccaneers to a victory over the Washington Football Team in an NFC wild-card game in Landover, Maryland.

Leonard Fournette added 132 yards from scrimmage (93 rushing, 39 receiving) and a three-yard touchdown run for the fifth-seeded Buccaneers, who recorded their first playoff win since Super Bowl XXXVII on January 26th, 2003. The Buccaneers’ next opponent will be determined by the result of the New Orleans-Chicago playoff game on Sunday. The Buccaneers would host the sixth-seeded Los Angeles Rams should the Bears win, or they’d visit the second-seeded Saints if New Orleans is victorious.

Redskins quarterback Taylor Heinicke threw for 306 yards with a touchdown and added an eight-yard scoring scamper while starting in place of Alex Smith (calf strain). Heinicke’s dive for the pylon trimmed the lead to 18-16 late in the third quarter, but the Buccaneers responded with Ryan Succop’s 38-yard field goal and Fournette’s touchdown run early in the fourth.