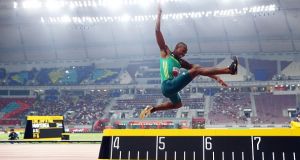 The London 2017 world long jump champion, Luvo Manyonga – who made worldwide headlines when he recovered from a crystal meth addiction to become one of the faces of track and field – faces a four-year ban after being provisionally suspended for anti-doping whereabouts failures.

The South African, who also won a silver medal at the Rio Olympics in 2016, has been charged by the Athletics Integrity Unit after missing three tests in a 12-month period.

Normally the penalty for whereabouts failures is a two-year ban. However, the 30-year-old has struggled in the past with addiction to tik – a variant of crystal meth commonly used in his home township – and was banned for 18 months after giving a positive doping test in-competition at a national series meet in 2012.

That means if Manyonga is unable to provide an adequate explanation for his missed tests it will be regarded as a second offence and his ban would be doubled to four years.

Last year the 30-year-old was fined for public drinking and contravening South Africa’s strict lockdown restrictions. In an interview with the South African Sunday Times last month he denied that he had relapsed into drug addiction and said he was “100 per cent well”. But the reporter noted that when he spoke about his athletics future “it was as if he were lost in a maze”.

After Manyonga returned from his first ban, he won an Olympic silver with less than a year of proper training and then went on to take gold at the world championships in 2017. That year he also set a personal best of 8.65m before going on to claim a Commonwealth Games title at the Gold Coast a year later.

However, he failed to defend his world title in Doha in 2019‚ finishing in fourth after a leap of 8.28m.

“I focus on a day at a time and stay far from anything that is going to lead me towards a relapse – alcohol, going out, that’s not a part of my life at the moment,” he said in 2017. “I want to focus most on the moment I am living now, that is the main important thing for me as a recovering addict. I don’t want to disappoint myself.” - Guardian