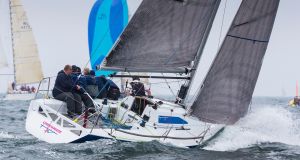 The main sailing season is drawing towards its end with a slew of results from at home and abroad this week including some notable results by Irish yachtswomen.

Last weekend saw the 2.4 metre class sail their national championships as part of the Watersports Inclusion Games in Galway and Kinsale’s Gina Griffin delivered three straight wins to secure the title and boost her prospects if the sport is readmitted to the Paralympics.

Meanwhile, off the coast of France this week, Mayo’s Joan Mulloy became the first Irish woman to compete in the ongoing single-handed Figaro Race circuit when she completed the first leg after four nights at sea.

Closer to home on Lough Derg, Tokyo 2020 hopeful Aisling Keller won the Laser Radial national title on home waters which will be a boost to her prospects as she prepares to head to Japan next week for the Sailing World Cup and pre-Olympic regatta there.

Other titles decided at Dromineer included Liam Glynn from Ballyholme in the Laser Standard and Sean Craig of the Royal St. George YC who won the masters title ahead of the World Championships that will be held in Dun Laoghaire next month.

There was positive news from China too this week as four young Irish sailors made the top ten overall at the Topper World Championships where a nearby typhoon made for challenging sailing.

Hugh O’Connor of the National YC took second place in the competition while Erin McElwaine from Newcastle YC was awarded first Lady in seventh place overall while Hugh Lynch from the Royal Cork YC was fifth with clubmate David Jones ninth.

Following on from last year’s event held in Kinsale, the Half Ton Classics Cup returned to Niewpoort in Belgium this year where a fleet of almost 20 boats turned out for a range of conditions ranging from near calm to near gale.

Phil Plumtree’s Swuzzlebubble, the outright winner in 2017 that had proven virtually unbeatable was absent this year so the early part of this year’s event looked set to go to Robbie Tregear’s Per Eliza until the breeze picked up.

With winds gusting to 30 knots that served-up a three-metre swell, Howth YC’s David Cullen on Checkmate XV pulled ahead in the series going into the final day. Although not as windy, a substantial seaway remained last Saturday that caused the anchor warp on the committee vessel to snap ahead of the final race.

With enough points in hand whether or not the final race was sailed, Cullen’s team, which included Cork pro sailor Nin O’Leary, emerged overall winners of the testing series.

In the Southern Ocean, Ireland’s Gregor Guckian on Hanley Energy Endurance marked his 60th day at sea in the Golden Globe Race solo around the world by passing the infamous Cape of Good Hope as he holds third place overall.

The event that recreates the original round the world race sailed 50 years ago mimicks the boats and conditions of that event including limiting the single-handed sailors’ technology, especially for navigation with GPS disallowed under the race rules.

That has led to boats sailing in more extreme conditions than modern races that can anticipate storms and avoid the worst conditions. However, widespread damage has led to numerous boats retiring or being downgraded in the event after gaining outside assistance including communicating with shore support.