More disappointment for Irish on day three in Beijing

Finn, Treacy and O’Flaherty out in steeplechase semis while Pena out of pole vault 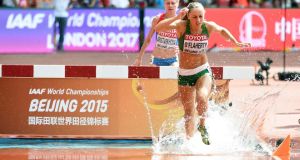 Kerry O’Flaherty missed out on place in the steeplechase final at the World Championships in Beijing. Photograph: Inpho

It proved another tough morning for the Irish athletes inside the Brid’s Nest, as the trio of Irish women all fell short of making the World Championship final in the 3,000 metres steeplechase.

Michelle Finn, Sara Treacy and Kerry O’Flaherty certainly battled hard in the respective heats, but not for the first time at these Championships, qualification was far from easy.

Finn, from the Leevale club, was first up in heat one and she finished 9th in 9:55.27, not helped by the hot and humid conditions. “It was fun, it was cool to run here but I would have liked to have run faster,” said Finn.

Treacy from Dunboyne was next up in heat two and was a little more frustrated with her 13th place finish in 9:48.24. “It was hard, I’m not very happy with my race,” said Treacy. “I’ve so much to improve on and I’m glad I got the experience, so I can only improve for next year. I’m raging, but there you go, it was my third quickest (time). It was solid enough but I know I’m capable of quicker. It’s annoying not to run a season’s best.

O’Flaherty from Newcastle rounded out the triumvirate finishing 13th in the third, and final, heat in 10:05.10. O’Flaherty struggled in the heat although the 34-year-old looked at the positives.

“I’m disappointed about the time but I’m delighted to be here, and hopefully on the road to Rio now it’s given me the chance to run against the best in the world and experience the call room and everything.”

Tori Pena from Finn Valley also ended up 10th in Group A of the women’s pole vault qualification, with a best of 4.30m - but again that wasn’t enough to get her into the final. The US based athletes was hoping for more and felt she should have cleared 4.45m and yet was still reasonably happy with her overall progress this year.

“I wanted a bit more,” she said afterwards. “This year was definitely a building year for me. Last year was really rough, I struggled with injuries so I’m happy overall with the progress, but my training didn’t really show today.”