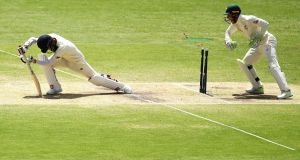 Shoddyline? Wobblyline? Amid a frenetic fourth afternoon at the Gabba that saw the hopes the suncream-slathered travelling support rise, before eventually crashing down, it was the marginal decision that sent Moeen Ali on his way that sparked some curious white line fever.

When the scorebook for this Ashes opener is pored over it by future generations it will simply read MM Ali st Paine b Lyon 40 and tell little of the debate that resulted. It ranged from atomic level analysis of the batsman’s back foot, to the thickness of the painted crease, all with the nebulous “benefit of the doubt” thrown in for good measure.

First, the wicket. England, five down at lunch after the loss of Joe Root for yet another unconverted half-century, were suddenly rebuilding through Moeen and Jonny Bairstow. The former, having looked ephemeral at first, had started to unfurl some of the shots that make him the most aesthetic batsman on either side and a stand of 42 had pushed the lead to 129.

Lyon, in the 54th over and with the pelts of two more left-handers in Mark Stoneman and Dawid Malan already secured, ripped another ball past the outside edge of Moeen’s lunging defence with Paine whipping the bails off in a flash. While his team-mates were gasping at what they thought was another near-miss, the wicketkeeper recalled to the side for his quicksilver glovework was imploring the square-leg umpire, Aleem Dar, to check for the stumping.

Dar relented and up in the third umpire’s booth the New Zealander Chris Gaffeney perused the footage. After a couple of minutes taking angles both sides of the wicket and from the stump camera, he decided that, as close as the all-rounder’s boot was to being over there was nothing to suggest it was. OUT popped up on the Gabba’s Dulux-sponsored big screen and Mo had to go.

Opinions were immediately divided and not necessarily along national lines.

Correct said Michael Vaughan the Channel 9 commentary box, while Michael Clarke called for the benefit to go to the batsman (despite this being at best convention, rather than actually enshrined in the laws). A case of different strokes for different folks, if you will.

But then came the stills (and some rudimentary photoshop skills) cascading down the timelines of social media, pointing out that section of the popping crease appeared swollen in the middle and perhaps by a margin that would have otherwise favoured Moeen. Could an on-field decision, in this era of technology, really hinge on the groundstaff’s choice of paintbrush?

While Appendix C section 1 of the ICC playing regulations set out the dimensions of the crease, there is no guidance as to the thickness of the lines. It varies from ground to ground and as matches wear on, the grooves and indentations caused by the bowlers’ footmarks and the scratching of guards mean the canvas for the curators becomes undulating.

Speaking after stumps, when Australia were within touching distance of taking a 1-0 series lead into the day-night second Test in Adelaide that starts on Friday, Moeen spoke was typically philosophical fashion about the decision before attempting to draw a line under it.

“If I was bowling, I’d want it to be out,” he said. “It depends on the angle you look at it but you have to respect the umpire’s call. You just have to move on. I thought I was all right personally, but the replay did make it look tight. I was disappointed I got out in that fashion but mostly the timing of it. Me and Jonny were building a good partnership. I was over straight away.”

Perhaps this was simply the final inadvertent gift of the Gabba from Kevin Mitchell Jr, the retiring curator who has never witnessed an Australian defeat during his 27 years in the job. The bottom line is the batsman knew where the popping crease was, irrespective of its girth, and Gaffeney’s judgment was easy to understand.

After all, England’s problems – shot selection, a crepe-paper tail and an attack that drops off after Stuart Broad and Jimmy Anderson to name a few – run far deeper than one of cricket’s quirkier dismissals. They will need addressing fast if they are to keep this incident as the only talk of whitewash on tour.