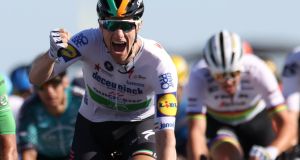 A first stage win, the green jersey suitably regained, and a special place in Tour de France history, turns out the only thing Sam Bennett ended up losing after the stage 10 finish on the island of Île de Ré was a hold of his emotions. Why not?

It started just after Bennett crossed the line in first, the Irish rider holding off Peter Sagan to his right, and Caleb Ewan to his left, these arguably the three fastest cyclists anywhere in the world. Once slowed down, Bennett immediately radioed back to his Deceuninck-QuickStep team car.

It was close, only this time Bennett had his cigar. Because just when it seemed too that the closer he came the harder it was becoming – he’d finished second, third and fourth in the opening week – Bennett made no mistake in delivering the perfect sprint after the flat 170km run from Île d’Oléron, hardly believing himself how perfect it had been. Voilà!

“I don’t think it’s hit me,” Bennett said, in the immediate post-race interview that goes out live to millions. “Because I forgot to throw my bike at the line, in the moment, and I thought he [Ewan] might have got me. I thought I might be in the floods of tears, but I just in shock . . . ”

Only with that Bennett was in floods of tears, and perfectly understandably so. “You dream of it, you never think it will happen. Sorry, I don’t mean to be a cry baby . . . ”

Described in the Tour itinerary as a “golden opportunity” for the sprinters, Bennett still needed to display every inch of his sprinting prowess in what was a tricky finish on the western coast of France, particularly given the exposed roads and crosswinds. There was also plenty of road furniture to dodge, multiple roundabouts and traffic islands adding to the obvious caution.

Only there was no second guessing for Bennett this time, as he hit the front in the final 50 metres after the prefect lead out from his Deceuninck-QuickStep team-mate Michael Morkov, holding off the chasing Sagan, his Slovak rival who took third, with Ewan from Australia closing fast in second.

“It was really weird, because everything seemed to go too perfect at the end,” Bennett later added in the race press room, only a little more in hold of his emotions. “I was almost in shock, 50m from the line. I couldn’t believe it happened, thought maybe one person had got by me on the line. And after the line, it just didn’t hit me.

“You wait so many years for this to happen, and to get this opportunity, it took a while for it to really sink it. And it’s just a relief, when you have so many great riders who have passed through this team, and delivered here, I needed to do this, to come to the Tour de France and deliver for this team, after Patrick [Lefevere, the team manager] gave me this opportunity, this amazing opportunity. I really wanted to deliver for them, and also my team-mates, who worked superb all day.”

Starting the day trailing green jersey leader Sagan by seven points, and conceding another two in the intermediate sprint that came just 39km from the finish on the seafront at Châtelaillon-Plage, Bennett took 50 points for the stage win, with Sagan from Bora-Hansgrohe getting 20 for third, and so now moves 21 points clear in the green jersey race, 196 to Sagan’s 175.

It’s still a long way to Paris on Sunday week, but with Wednesday’s stage the only probably flat one before then, the 29-year-old Bennett has a great chance of keeping it all the way to the Champs-Elysées – and completing the green link with fellow Carrick-on-Suir rider Seán Kelly, the last Irishman to wear it into Paris in 1989.

“It’s not so much of a coincidence,” he said of that link. “It just seems you have all these experienced guys, interested in the cycling culture, there is support to bring them through. You could go out on a Sunday spin in Carrick-on-Suir, and it’s a small town, but you could have 80 riders. That wouldn’t even be everyone, in the group. It’s just such a good environment to bring guys through, the support and the experience.

“And I’m proud to be representing Ireland, and here with my national championship jersey, at the biggest bike race in the world. For sure, I’d love to bring home the green jersey. But Peter has won it so many times for a reason, he’s one of the best at this game. This is a confidence booster, but we’ll just take it day by day.

“I always say my three dream wins would be San Remo, Champs-Elysées, and World Championships. I never really thought about the green jersey until I was wearing it, and it’s something special. I think for this year I’d give up Champs-Elysées . . . actually I don’t know. Look, whatever comes my way, I’d be happy to take.”

His special place in Tour history is twofold: only the sixth Irish rider in the 107-year history of the race to win a stage, Bennett becomes only the second Irish rider, after Shay Elliott, to win a stage in all three Grand Tours – having already won three in the 2018 Giro d’Italia, and two stages in the 2019 Vuelta a España. In the very long history of all three races, only 98 riders in all have managed that feat.

The 170km of Stage 10 from Île d’Oléron to Île de Ré was mostly pancake flat, only without much shelter, particularly over the 2.9km bridge that connects La Rochelle to the island of Île de Ré, and the crosswinds sometimes made for treacherous cycling. Just ask Nicolas Roche.

The team Subweb rider got caught in the first crash that came after 69km and took down several riders, ending the race for Sam Bewley from New Zealand, and although the peloton was back together with around 90 km still to ride, Roche clearly suffered from his wounds in the last 50km, and finished the stage in 156th place, 10 minutes and 52 seconds behind Bennett, dropping to 76th overall. Dan Martin from Israel Start-Up Nation also struggled in that last third of the race and finished 130th in the second group that came in five minutes and 25 seconds behind, dropping two places to 64th.

Primoz Roglic from Team Jumbo-Visma, who on Sunday’s stage 9 finish at Laruns in the southwest Pyrenees became the first rider from Slovenia to win leader’s yellow jersey, comfortably defended on this stage, and still sits 21 seconds ahead of defending champion Egan Bernal from Ineos Grenadiers.

1 Born to ride, born to win: Sam Bennett, the making of a green machine
2 Suarez’ Italian language exam rigged according to prosecutors
3 A kick in the teeth for sports, and a nail in the coffin for communities
4 Sam Bennett hoping Tour de France success does not bring celebrity status
5 Saracens’ Michael Rhodes cleared of headbutting Leinster’s Robbie Henshaw
Real news has value SUBSCRIBE