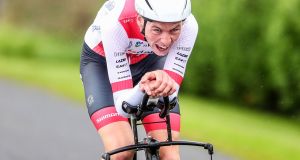 Belatedly staged but no less sought after, Conn McDunphy earned the first of the Irish champion cycling jerseys on offer at the National Road Race Championships, winning the senior time trial by a mere two seconds.

In a sort of changing of the guard, the 23-year-old got the better of previous champion Nicolas Roche, who did endure some technical difficulties at Knockaderry in Limerick on Thursday morning, still was no less gracious in defeat.

The fastest outright time over the 22.3km course was clocked by Ben Healy, of the UK-based Trinity Racing team, the 22-year-old thus earning the Irish under-23 title.

The 36-year-old Roche was the favourite to retain this title he won twice before, only couldn’t quite better McDunphy, the Lucan rider who this year has been racing in France with the CC Nogent/Oise team; his time of 26:29 was enough to see off Roche, who clocked 26:31, with Lindsay Watson of Powerhouse Sport securing the bronze with 26:51.

“I’m in shock to be honest, to be one of Ireland’s best ever cyclists is never an easy feat,” McDunphy told Cycling Ireland. “Nico has won so many things so I am just so happy with the ride.

“I felt I was on a good day. I wasn’t sure what to expect initially when I came home from France and was on quarantine for 14 days. I haven’t raced in 20 days but when I was warming up on the road I felt good and I got five kilometres in and, I know this sounds cheesy, but I just smiled because I knew it was a good day.”

Roche later tweeted: “Not my day. Mechanical before the start, wheel change, no spare disc wheel... Nevertheless some ride by McDunphy congrats on title. And Ben Healy smashing the course time! The youngsters are riding fast!”

Healy finished in 25:55, ahead of Kevin McCambridge (Wiggle Weldtite Pro Cycling) in 26:23, and Mitchell McLaughlin (Zappi Racing) in 27:29.

1 Golf in Level 5 Covid restrictions: Clubs still waiting to hear if they can remain open
2 Gordon D’Arcy: Ireland don’t need to do a Finn Russell on it
3 Hugo Keenan could start in changed Ireland team against Italy
4 Aki, Ringrose and Henshaw: Brian O’Driscoll has his say on Ireland’s midfield riddle
5 No underage or minor GAA to be allowed under Level 5 Covid-19 restrictions
Real news has value SUBSCRIBE

No underage or minor GAA to be allowed under Level 5 Covid-19 restrictions 08:28
Ole Gunnar Solskjaer hails players after win over PSG 07:57
Rashford gives Man United another win in Paris; Gordon D’Arcy on Finn Russell 07:34
Seán Moran: Let’s leave the confusion aside and enjoy this All-Ireland 06:30
Gordon D’Arcy: Ireland don’t need to do a Finn Russell on it 06:00
Here is your handy guide to sport on television this week