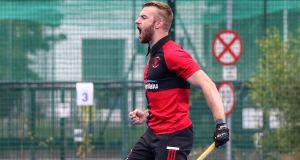 YMCA’s Ben Campbell celebrates scoring his side’s second goal in the victory over UCD at Belfield.

YMCA withstood a UCD penalty corner onslaught on the final buzzer to take their place in a group of three at the head of the men’s EY Hockey League following their perfect start to the season.

It is looking to be quite the turnaround for Jason Klinkradt’s side who occupied the relegation playoff place when lockdown came in March with the early signs suggesting they may stay clear of those troubles.

Against the students, despite those late chances, the Y were full value for their victory after a high-octane first half in which Ross Henderson finished off at the back post while Ben Campbell’s drag-flick had too much power.

At 2-0, they looked the more likely to score again before half-time but UCD have one of the league’s top guns in Guy Sarratt and he nailed a corner shot to halve the gap.

They duly ground out a last second set-piece chance which was reset four times but YM’s defensive unit, underpinned by Grant Glutz and goalkeeper Cameron Larkin eventually averted the danger.

For Larkin, it continued his excellent form, coming into the side for the injured Jakim Bernsden thus far this season and Glutz was full of praise for him.

“Seriously nerve-wracking end but we backed our ’keeper and the defence ran some great lines; and got a bit lucky,” he said of the win which has helped build confidence.

“With the break being so long, the guys were so keen to be back and maybe we are that bit more hungry than last year and we are fortunate to get those six points straight up.”

Coach Klinkradt is happy to have kept the guts of his side together after large turnovers in players the last two summers and it is paying dividends while South African international Peabo Lembethe is a strong addition.

It sees YM level with Monkstown who needed a late Jeremy Duncan goal to beat Annadale 2-1, the Ulster side now going over 12 months since their last point in the competition.

Eddie Rowe, meanwhile, scored twice in the last six minutes to earn Banbridge a 2-2 draw against Glenanne. Stephen Brownlow and Shane O’Donoghue had both scored in the first 20 minutes to seemingly put the Glens on course for victory.