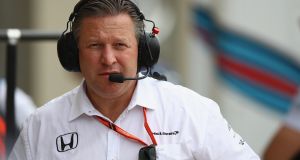 Zak Brown: McLaren have recently put staff on furlough but Brown says the expected drop in revenue could put F1 at a crisis point. “This is potentially devastating to teams.” Photo by Clive Mason/Getty Images)

McLaren chief executive, Zak Brown, has warned of potentially devastating results for Formula One teams because of the financial impact of the coronavirus pandemic. Brown cautioned that the sport could lose as many as four teams if F1 does not act aggressively to tackle the substantial loss of income they are facing.

The Williams team also reacted to the seriousness of the situation on Monday, announcing they had put a number of staff on furlough, with drivers and management also taking a pay cut. Racing Point have also put some staff on furlough and and have accepted voluntary pay cuts from its drivers, Lance Stroll and Sergio Pérez.

The opening eight races of the F1 season have already been called off because of the outbreak and spread of Covid-19. Race fees are one of the three biggest sources of income for the sport and the other two streams, broadcasting rights payments and sponsorship, will be similarly depreciating.

McLaren have recently put staff on furlough but Brown believed the expected drop in revenue could put F1 at a crisis point.

“This is potentially devastating to teams,” he told the BBC. “If [it is devastating] to enough teams, which doesn’t have to mean more than two, then it’s very threatening to F1 as a whole.

“Could I see, through what is going on right now in the world if we don’t tackle this situation head on very aggressively, two teams disappearing? Yeah. In fact, I could see four teams disappearing if this isn’t handled the right way.”

Brown, having added that “F1 is in a very fragile state at the moment”, argued that the budget cap of $175m (approximately £142m), set to be introduced in 2021, needs to be lowered urgently. The teams have already agreed in principle to drop the spending limit to $150m.

“You have everyone at $150m, and the strong majority – including one of the big teams – willing to come substantially under $150m,” Brown said. “If we don’t make an aggressive enough budget cap and some people feel they have to top up this year and have no chance of getting it back, then they ask themselves: ‘Why are they in it?”

It is understood Mercedes are one of the three highest-spending teams willing to see the budget cap lowered, with Ferrari and Red Bull opposed.

With no racing possible until the Canadian Grand Prix on June 14th at the earliest, Williams have furloughed staff to cut costs. Senior management and drivers have also taken a 20% pay cut.

Last week, the promoters of MotoGP, Dorna, offered financial assistance to some of its teams to ensure they can meet staff salaries.