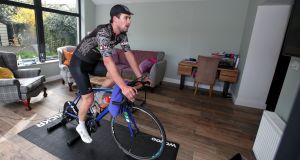 Matteo Cigala takes part in the race in his house. Photo: Bryan Keane/Inpho

Matteo Cigala was in the chasing group somewhere between the sand and the sequoias when he got held up in the first crash. Not the bloody road burn type, but the internet connection. It quickly recovered and Cigala did too but the time loss was significant.

Such are the perils of any competitive cycling race, virtual or otherwise, but when the country is in lockdown and the half the world is too it’s a far more pleasurable sort of pain.

Here’s the scene: it’s Saturday morning at 10am and the very large peloton of around 1,200 riders are all lined up to race each other, only from a perfectly safe distance apart – from the stationary comfort of their own kitchen, sitting room, or bicycle shed. It was, by some distance too, the largest sporting event in Ireland this weekend.

It is race two of the Cycling Ireland’s new 12-race Zwift League series, two-laps and 43km through the virtual Sand & Sequoias route. Though Italian born and raised, Cigala is no stranger to road cycling in Ireland, regularly using the Zwift e-racing platform as part of coaching practice, and familiar with the Irish roads too, the highest ranked domestic A1-category rider here in 2017.

“A few of us were talking with Cycling Ireland a few weeks ago, and because of the situation, no racing or training on the road, and with feedback from fellow cyclists, saw the opportunity for this,” says Cigala, who rode for Italy as a junior, and is now based in Dublin.

“We all like to race and test ourselves against the riders we know or see most weekends. There is always more motivation to show up. So I think Cycling Ireland have done great job putting this league together, at the same time, and place. Also in picking the best eight races from the 12, in deciding the overall result, because if you’re beginning it does take some time to get used to Zwift. Or also if you’re internet does crash, you lose time like that too.”

Male and female riders have four categories to choose from meaning all levels are catered for: in order to race, riders just need to download the Zwift App, sign up for league via Cycling Ireland, then select their race category based on wattage output, riding on an indoor trainer, using a regular bike, or a smart trainer: “A power meter is a plus, though not completely necessary, is used for race positions though, because estimated power is not the same as real power,” says Cigala.

“It is very, very hard at the start, because everybody, without knowing the body knowledge of the other rider, is going very fast the first five, 10 minutes, really full effort, but you will end up in the group most similar to your ability. Then you can attack, or breakaway, the real life tactics that comes with cycling.

“You need a little luck as well, even in terms if your internet. If your WiFi goes down, that becomes an issue, and I recommend to everyone to warm up at least half an hour before the event, make sure the connections are good. When the internet goes down, you’re still able to ride, but when it starts again, you find you’re on your own. But this is all part of the game. It’s for competition yes, but also for enjoyment.”

Belfast’s Chris McGlinchey, who rides with the pro Continental tour team Vitus Pro, made it two wins from two, winning the bunch sprint just ahead of Rainer Kepplinger from Switzerland, both clocking 51:27, with Britain’s Josh Giddings, one second back in third in 51:28.

“With Chris, he races a lot on Zwift, and you can see he knows what to do, with the drafting, knowing the course as well, where is the climb, when is to sprint.

“You need to be really, really fit, for sure. There is no hiding, and if you haven’t been training, it will show. Right now I’m not really race fit, and I did suffer a bit. But for me it was fun, losing the WiFi for about a minute, in the second group, and I lost maybe a minute (he ended up 93rd); for me, a for a lot of the riders, it’s a really good way to stay fit, and stay motivated, for when the season gets back on the road, and the races begin again for real.

“And riding on Zwift, because it’s so interactive, the two hours of racing, or however long it lasts, goes by very fast. It definitely takes the boredom out of the regular indoor cycling session.”