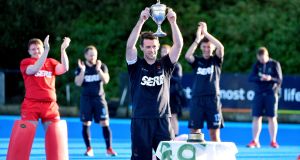 After the Dublin college’s women had won the earlier final, it also denied UCD a unique place in hockey folk - never have both the men’s and women’s titles been held by the same club at the same time.

Garvey had begun in dream fashion, Ben Nelson scoring just 75 seconds into the contest but Andrew Meates tied things up with scarcely three minutes on the clock.

And with Conor Empey ghosting past players in midfield UCD were good value when they took the lead before half-time. It was scarcely a thing of beauty as Guy Sarratt’s attempted slam-dunk bounced off the post and was eventually bundled in, Sam Byrne getting the official credit.

The students, however, sat too deep in the second half and invited on wave after wave of Garvey attack. They should have got some respite when Andy Edgar took a yellow card for a hard shoulder on Empey but, in his absence, the Ulster side crucially struck twice.

Nelson picked up the pieces from a loose clearance at close quarters to slip in the 2-2 goal. Andy Williamson may well have been muttering under his breath when he was waiting to sub on for Edgar only to be delayed for the former’s suspension.

He did get on seconds later, though, for the game’s most telling touch, finishing off Troy Chambers’ cross.

Goalkeeper James Milliken then brilliantly maintained the narrow advantage with a stick save onto the post from Guy Sarratt with time running out to secure the victory.

Gerry Thornley on size of Ireland’s Parisian task; Son the star for Spurs again 07:48
Eddie Jones says he can’t guarantee England players will follow Covid-19 rules 06:55
Drogheda in the driving seat as Division One reaches a thrilling finale 06:00
Regionalisation may be the key as league adjusts to new reality 07:52
Damien Comer to miss another Connacht championship following hamstring injury 06:00
Here is your handy guide to sport on television this week