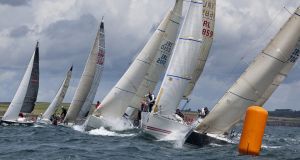 Mounting issues for the largest segment of Irish Sailing affecting around 7,000 competitors will be addressed at a special review in Limerick this month. Photograph: David Branigan/Oceansport

Mounting issues facing the largest segment of sailing may lead to an overhaul of the Irish Cruiser Racing Association (ICRA) depending on the outcome of a special meeting in Limerick this month.

ICRA is the representative body for owners of larger boats that typically race under IRC and ECHO handicapping systems, and are found at most venues around the coast.

The organisation was founded 15 years ago when sailors from Cork and Dublin, the traditional strongholds for the sport, came together to jointly promote initiatives such as an annual national championships and teams for the biennial Commodores’ Cup in Cowes, England.

Ireland went on to win the Commodores’ Cup on two occasions under Anthony O’Leary of the Royal Cork Yacht Club, and fleet turnouts of 100 boats or more were commonplace at the nationals.

However, an Irish squad has not competed in Cowes since O’Leary last won in 2015, and there are no immediate prospects for the next event in 2019.

Meanwhile disagreement within the ICRA ranks about the staging of the national championships has placed a question mark over the format of the event, with numbers down in 2017 and fears that the west coast venue for this year may prove too distant for some key competitors to travel to.

However, the biggest issue facing the sport that the ICRA leadership cites is lack of crew, which in turn hits turnouts at local and national regattas.

Nationally, the fleet of IRL-registered boats holding an IRC and/or ECHO handicap certificate is close to 480 boats. The average boat size is approximately 30feet so typically requires a crew pool of about 15 people for a busy season. That equates to roughly 7,000 regular competitors around the country, and not all at just the major locations in Dublin and Cork.

Membership of ICRA is open to any boat owner with an IRC and/or ECHO handicap certificate who is also a member of an Irish Sailing affiliated club. Attendance at the workshop is open to all, crew included, but especially stake holders such as club and regional organisations.

Acting on a suggestion from Irish Sailing during a review of the funding memorandum late last year, the ICRA leadership invited Steve Griffiths, a former strategy development manager with World Rugby, to lead the session and develop a strategy for cruiser-racing for the next five years.

According to ICRA commodore Simon McGibney, the organisation is not at a crossroads as such. “From year to year ICRA has been responding to issues at the present time rather than trying to plan for the future. Where is the vision for the future?” he said to The Irish Times on Wednesday.

Part of the landscape that makes up the sport is that the ICRA itself is one of several representative bodies. It fits in with Irish Sailing by taking responsibility for the area of cruiser racing but only two years ago achieved a memorandum of understanding of how this would develop.

Additionally, numerous local organisations also exist serving similar purposes on a regional basis, though without formal links or obligations to either ICRA or Irish Sailing.

Other bodies with significant input into local cruiser racing include large clubs such as Dublin Bay Sailing Club and Wicklow SC which organises the biennial Volvo Round Ireland Race.