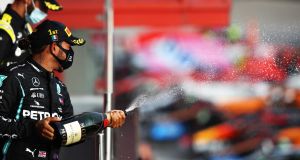 Lewis Hamilton won the Emilia Romagna Grand Prix at Imola having made the most of his pace and strategy to take the lead and then command the race. He beat his Mercedes teammate Valtteri Bottas into second, with Renault’s Daniel Ricciardo in third. The win ensured Mercedes have sealed their seventh consecutive constructors’ championship. Daniil Kvyat was an impressive fourth for AlphaTauri with Ferrari’s Charles Leclerc in fifth.

Hamilton delivered another masterclass of controlled driving, which he matched with some exquisite quick laps after he had dropped to third place off the start line at the Autodromo Internazionale Enzo e Dino Ferrari. Having managed his tyres in the opening stages, he chose to go long and then when he had put himself in a very strong position to potentially take the lead through his pit stop, a virtual safety car ensured he claimed it comfortably.

Back in front, the British driver then hared off in the distance to take the win and put his seventh world title within touching distance.

Hamilton has not raced in F1 at Imola before although he did compete in GP2 in 2006, the last time F1 held a meeting at the circuit. Having also taken the top spot this season at Mugello and Portimao, venues that have not hosted F1 either, Hamilton has now reached the extraordinary tally of having won at 29 different circuits across 24 countries in his 14 years in F1, the most wide-ranging of any driver in the sport’s history.

His 93rd career win continues his remarkable dominance this season. With nine from 13 races, he is in complete control of a championship he is ready to close out. He leads Bottas by 85 points, with four races remaining. A 78-point lead after the next round at Istanbul would be enough to equal Michael Schumacher’s record of seven.

Mercedes have also made their own remarkable history. With their seventh consecutive title, they have a new F1 record, one more than Ferrari achieved between 1999 and 2004. They returned to F1 as a constructor in 2010 after their initial two seasons in 1954 and 1955, when they took the drivers’ title both years before withdrawing after one of their cars was involved in the crash at Le Mans that killed 83 spectators.

The Autodromo Internazionale Enzo e Dino Ferrari held its first meeting in 1980, the Italian GP. It then hosted the San Marino GP every year until 2006 but is perhaps best known as the venue where Ayrton Senna and Roland Ratzenberger were killed on the same weekend in 1994. Senna was Hamilton’s hero when he was growing up and it was clearly an emotional moment for him to secure Mercedes’ seventh title at the track where Senna died and where the Brazilian claimed three victories.

Bottas made a clean start to hold his lead from pole but Hamilton was a little slow and dropped to third, beaten by Max Verstappen before the chicane at Tamburello. Hamilton had warned how hard passing would be at Imola and so it proved. Unable to follow too close to the cars in front, the world champion instead chose to put as little wear as possible into his tyres.

Line astern there was, however, little to choose between them in lap times but Bottas put in some fast one just before Red Bull pulled the trigger on their pit stop, bringing Verstappen in for the hard tyre on lap 19. Hamilton, however, felt he had more to come and insisted to his team he wanted to stay out when Bottas came in on lap 20.

The British driver had the lead and had to make the most of having saved his tyres. He was looking to have fresher rubber at the death. That he had pace was clear as he promptly put in a series of fastest laps in clean air.

Bottas, however, was carrying damage to the floor of his car after picking up a piece of debris and he was slow, while Hamilton and his team agreed to stay out even longer, which proved inspired as fate intervened. By the time he did come in for his only stop, when the virtual safety car was called because Esteban Ocon retired on lap 30, he had a 28-second lead.

The gap may have been enough to have earned the British driver first place but with the field slowed and losing less time in the stop under the VSC, it proved moot. Hamilton emerged comfortably in the lead from Bottas, an advantage he went on to quickly extend. Bottas continued to frustrate Verstappen in third but finally the Dutchman made a fine pass on him on lap 43 through Tamburello. His elation was short-lived, however, as he suffered a tyre failure on lap 51 and he was left stranded at the Villeneuve chicane.

The resultant safety car, compounded when George Russell also crashed out, did not derail Hamilton. He had already done enough and having executed a perfect restart, closed out the win with aplomb. Sergio Pérez was in sixth for Racing Point, Carlos Sainz and Lando Norris seventh and eighth for McLaren, with Kimi Raikkonen and Antonio Giovinazzi in ninth and 10th for Alfa Romeo. – Guardian