Lewis Hamilton calls for changes after ‘most boring race ever’

Monaco Grand Prix was exceptionally dull to partake in and to watch, say drivers 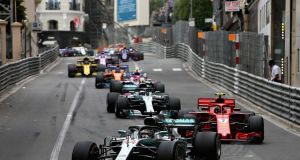 Lewis Hamilton has said the Monaco Grand Prix must adapt if it is to present exciting racing. The race on Sunday was won by Red Bull’s Daniel Ricciardo, but the four-times world champion, who finished third, was one of several drivers to say it was an exceptionally dull race to partake in and to watch.

Ricciardo, Ferrari’s Sebastian Vettel and Hamilton finished in the same positions as they had started and despite Ricciardo being down on power, no one was able to pass him. Nor did his rivals feel they could even push to attempt to do so because they were managing their tyres to ensure only one pit stop in order to not lose track position.

Hamilton said he had been cruising around and was intensely frustrated that, with passing all but impossible, he had been instructed at an early point in the race to just bring his Mercedes home. “It wasn’t really racing,” he said. “Ultimately we were turned down and just cruising around to make sure we got to the end.”

McLaren’s Fernando Alonso described it as “the most boring race ever” and Hamilton argued the circuit or race format should be changed.

“I spoke to Prince Albert the other day and said maybe we should make it longer,” he said. “There are more roads so maybe we can change this great track and make it even better. Or maybe the format should change.”

The circuit is largely as it was when it was created by Anthony Noghès in 1929, but the sport has changed drastically since then. There is scope to alter the layout, with land reclamation projects under way, one which will extend the area on the outside of Portiers before the tunnel, but is understood will not be completed until 2025.

Since the regulations of 2017 the cars are wider, which adds to the difficulty of overtaking in Monaco. This year it was a problem exacerbated by the use of the softest compound of tyres. Pirelli had been asked to provide new, softer tyres to give the chance for quicker lap times. But it came at the price of drivers being unable to push as they sought to avoid having to pit twice.

Hamilton suggested more stops should be mandated for the race. “You shouldn’t be able to do a one-stop race here,” he said. “There has to be some mixed-up things. It is the greatest track.”

There is also the problem of tampering with what is seen as a classic, historic grand prix. Monaco has such prestige it is the only race not to be charged a hosting fee by F1’s owners. Much as many fans and some drivers would like to see changes, there may be an inherent reluctance to do so.

Hamilton’s lead in the world championship over Vettel is 14 points but while Ferrari remain the main threat, he expects Red Bull to continue to improve.

“It definitely is a three-way fight,” he said “Sebastian and Ferrari are still the strongest, their car was quick here, it is working well through the whole season. But it is a three-way battle and Red Bull have an engine upgrade coming at some stage. They will continue to get stronger. While the race wasn’t the most exciting, hopefully it is great for the fans to see this battle. We are doing everything we can to win and then Red Bull also wins and Ferrari wins. It is challenging me; it is the biggest challenge I have ever had.”

1 Ian McKinley: ‘You do take for granted the simple things in life’
2 Nicholas Quinn: ‘Swimming became how I dealt with grief’
3 Reality Bites – Tales from the new normal: Caitríona Cormican
4 James McClean still failing to learn his own online history lesson
5 Matt Williams: We all need a bit of Bud Maher’s resilience right now
Real news has value SUBSCRIBE

Michael Walker: Carrying space and the benefits of learning to stand still 08:00
Ian McKinley: ‘You do take for granted the simple things in life’ 07:00
Matt Williams: We all need a bit of Bud Maher’s resilience right now 07:00
Reality Bites – Tales from the new normal: Caitríona Cormican 06:00
Nicholas Quinn: ‘Swimming became how I dealt with grief’ 06:00
Here is your handy guide to sport on television this week