Jarrell Miller pulls no punches in diatribe against Anthony Joshua 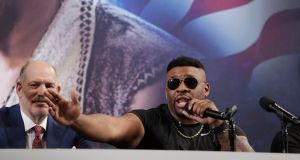 Miller questioned how tough a British fighter can be given the fact that “your cops don’t even got guns”. Photo: Frank Franklin II/AP Photo

Were prizefights won on self-belief and a sharp tongue, Brooklyn’s Jarrell Miller might already be the heavyweight champion of the world.

They and he are not, of course. But that didn’t stop the outspoken challenger to Anthony Joshua’s WBA, WBO and IBF titles, for years one of the division’s most prolific talkers, from berating his forthcoming opponent as a “fraud”, “prick”, an “Uncle Tom” and “giant pussy” in a sensational opening salvo on Tuesday in the press conference to announce their June 1st showdown at Madison Square Garden. Miller went on to accuse Joshua of taking testosterone, based on how much weight he put on after London 2012.

“This motherfucker has TUE test exemptions for testosterone and all kinds of shit,” Miller said. “I have been doing my research, who comes out of the Olympics at 220lbs and goes to 240lbs in a year?”

A Joshua spokesman told reporters at the press conference that Miller’s claims were “utterly false”. The boxer groaned at the mention from his opponent. The British heavyweight had previously made reference to Miller’s nine-month ban for testing positive for methylhexaneamine, saying he could not respect the fighter who was caught cheating.

Trash talk is an element hardly uncommon to this particular station of the big-fight buildup, but there was an edge to Miller’s resentment on the day that went beyond garden-variety salesmanship. The one-time kickboxer nicknamed Big Baby, unbeaten in 24 professional outings against mostly limited opposition, seems as hell-bent on puncturing the myth of Joshua’s meticulously crafted image as his unblemished record.

“The way he acts, the way he talks, the way he manoeuvres,” Miller said. “Supposedly he was a street kid. But what I heard, he was basically a square. He was a punk. He got punked in school a lot. He went another school, a little more uppity-up, a little more posh. Tried to become the bully, started hitting weights a little bit, thought he was going to be a street gangster. Sold a couple ounces of weed, so now he’s a drug dealer who turned his life around. Weed to me just means you’re a pothead, that doesn’t mean you’re a tough guy.

“How tough can you be? Your cops don’t even got guns! We’re in New York. We go to school, we go through metal detectors, wand up your backside every day. It’s a different mentality, a different state of mind.”

Miller spoke at length about his poverty-stricken upbringing in Flatbush and Bedford-Stuyvesant. A childhood of long nights sleeping on the floor. The Wonder Bread and canned Vienna sausage and Kool-Aid with no sugar. The roaches and the rats. All trappings of a hardscrabble youth that’s in stark contrast, he insisted, with Joshua’s self-fashioned backstory.

“The thing about New Yorkers is we can smell BS from a mile away. People are going to start seeing it the more they start talking to him: you can tell he’s not authentic, he’s not genuine,” he said. “Dude puts up a serious front. It’s the difference a role model and a real model. And he’s exactly what you call a role model. He’s a puppet. I call him a UK Uncle Tom. Straight up, that’s what he is, plain and simple.”

The 30-year-old Miller rates among the best of the rest – somewhere toward the middle or bottom of the top 10 – in a top-heavy division headlined by Joshua, Deontay Wilder and Tyson Fury, the three headliners who can each lay a legitimate claim to the title of world’s best heavyweight. The distance between the top tier and the second group is significant: Miller has opened as a 5-1 underdog on merit. Not that he minds.

“I’ve been an underdog my whole entire life,” Miller said. “I don’t need motivation. I was born, bred and ready to kill something. He needs the motivation. He got money. He got the recognition. He needs motivation.”

One by one Miller shot down Joshua’s accomplishments. His early fights? Walkovers against taxi drivers. His sexy knockout record? Inflated by premature stoppages by friendly English referees. His win over Charles Martin for the title? A sham against a paper champion. His signature victory over Wladimir Klitschko? A retired ex-champion coming off a loss. And don’t even get him started on the gold medal.

He added: “You can keep the gold medal. I’ve got street medals. They mean more to me than anything.”

It wasn’t all insult and bombast as Miller reflected on his long and unconventional path to the shot of a lifetime in his hometown. He recalled his first job as a teenager at a Dunkin’ Donuts – “I ate half the donuts and ice cream in the damn place,” he said – and his second at a used car lot, where he managed to sell a car on his first day. But even the morning’s more reflective tacks soon veered back to the champion.

“I didn’t sell a car after that again, but the owner liked me so much he let me stay because I brought energy to the establishment,” he recalled. “It taught me a lot about just being real. Athletes got to be real. We can all put on a suit and claim to be someone else and put a front on, but being real is a lot harder. And I see AJ fighting with himself on that all the time. The real part wants to come out but he can’t.”

Miller, who came in at a career-high 317lbs for his most recent outing in November, said he will open training camp during the first week of March in the Fort Lauderdale area, where he’s retreated to prepare for his last three or four fights. If Tuesday’s broadside was any indication, we’ll be hearing plenty more from him. Even if the outcome of the fight, in his assessment, is certain.

“He already lost,” Miller said. “The minute he said my name, I seen him stutter.” – Guardian service