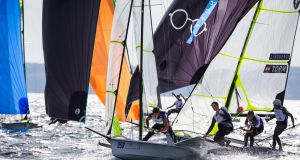 After months of speculation, the 2018 Volvo Irish Sailor of the Year award has been jointly won by the 49er skiff under-23 world champions Robert Dickson and Sean Waddilove at a well-attended ceremony at the RDS.

The Howth Yacht Club/Skerries Sailing Club pair won their gold medal at Marseilles last September, earning them an Afloat Sailor of the Month nomination that was added to a broad spectrum of candidates that fairly represents the sport in Ireland.

Dickson and Waddliove had the previous month competed at the Hempel Sailing World Championships at Aarhus, Denmark where, with three other Irish entries, they missed out on qualifying the nation for a berth at the Tokyo Olympics at the first attempt.

But with a 14-month gap to prepare for the next qualification round at the class world championships in New Zealand this November, the U23 world title and now the Sailor of the Year accolade are significant morale-boosters for the intense season ahead.

Whether or not they emerge as the favourite Irish crew to succeed all the way to Japan remains to be seen. But their major win last autumn is a solid portent not just because of their relative youth in the class but also because Marseilles will be the venue for the Paris 2024 Olympic regatta.

And while the North Dublin duo were worthy overall winners at the Irish Sailing awards, the depth of the nominations, while reflecting great diversity, also demonstrates the challenge of future growth within a relatively small population – one that isn’t always looking towards aquatic pursuits.

Put it another way, there may be a risk of spreading resources too thinly.

The run-down of nominees from the Afloat.ie website is telling: From cruising sailors with epic voyages to solo sailing in the ultra-competitive French offshore scene; club-level racers using every bit of spare leave to compete at events at home and abroad, with varying degrees of success but 100 per cent enjoyment even when racing against some of the best known professional sailors in the sport.

There’s continually improving diversity, big yachts and dinghies, classics and traditional, young and old, male and female, from sailors with disabilities to a truly nationwide range of venues including clubs and training centres; and of course, the pool of elite performance athletes from which Dickson and Waddliove emerged as overall winners.

It’s all positive in spite of the politicking that occasionally occurs.

Yet, most of the 400-500 people from around Ireland gathered at the RDS Concert Hall would surely agree that many more participants are needed to swell the ranks of the many options available to ensure their viability and future success.

No one quite knows for certain, but there are likely to be somewhere between 10,000 and 20,000 regular sailors in this country, the vast bulk amateurs and many highly-skilled at that.

But if this Island nation is ever to achieve its potential and get more people afloat, then more inspiring stories and victories at the highest international levels will be needed.

Chicken and egg anyone?