Equestrian: a successful weekend for Ireland ends in Florida disappointment 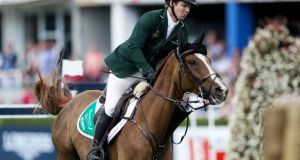 At the end of a successful weekend for Irish equestrianism, there was disappointment on Sunday when Team Ireland could only finish fourth in the first Longines FEI Nations’ Cup of the season at Deeridge Farm, Wellington in Florida.

The Michael Blake-managed team got off to the perfect start in round one when Cork’s Shane Sweetnam jumped clear with Indra van de Oude Heihoef. Mayo’s Cormac Hanley, who was making his Nations’ Cup debut with VDL Cartello, picked up four faults as did Limerick’s Paul O’Shea with Skara Glen’s Machu Picchu and Co Down’s Conor Swail with Rubens LS La Silla.

This left Ireland on an eight-fault total after the first round and in a share of second place with the USA as Mexico led the way on a zero score. In round two, Sweetnam and Hanley both finished on four faults while O’Shea left all the poles standing but picked up a single time fault. Swail provided the discard score when amassing 12 faults.

Ireland thus finished on a two-round total of 17 faults as the young Mexican quartet of Fernando Martinez Sommer (29), Eugenio Garza Perez (23), Juan Jose Zendejas Salgado (25) and Manuel Gonzalez Dufrane (24) won on four faults ahead of Israel (nine) and the USA (12).

As a European nation, Ireland wasn’t eligible for league points in Wellington. Their first points-scoring outing in Europe Division 1 will come at La Baule in France on May 19th.