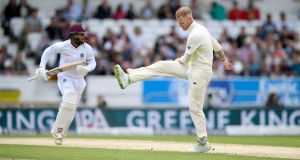 James Anderson put England on Ashes alert after a poor day in the field against the West Indies, admitting they cannot win the urn unless they play more consistent cricket.

Anderson was the pick of the attack on day two of the second Test at Headingley but was helpless to stop Kraigg Brathwaite (134) and Shai Hope (147 not out) pile on match-changing centuries in a stand of 246.

The tourists finished the day 71 ahead on 329 for five and while Anderson was frustrated with the bowling unit’s efforts on the day, he was quick to cast his mind forward to the forthcoming Australian tour and the improvements needed to compete Down Under.

“They batted well, we didn’t bowl very well,” was the blunt, initial assessment of Anderson, whose three-wicket haul left him on 495 Test scalps.

“Ironing out this inconsistency is a big thing for this team going forward. We’re still evolving and trying to improve.

“But we’ve got a big tour of Australia coming up in the winter and we really need to turn things around. We can’t go there, be inconsistent and expect to win the series – or any series to be honest. It’s something we’re aware of.”

Anderson removed Devendra Bishoo and Kyle Hope early on under cloudy skies to leave the opposition 35 for three but was unimpressed with how the attack coped with changing conditions in the middle.

“We weren’t patient enough, we kept trying to find the magic ball even when the sun was out and it was flatter. We still tried to get wickets rather than creating pressure,” he said.

“We talk about bowling in partnerships and we didn’t do that well enough, if someone was bowling well at one end there was a release at the other. We bowled quite a lot of bad balls and that’s not something we usually do. This is not the standard we set of ourselves.”

While that may be the case, this was primarily a day to acknowledge the skill and determination of Brathwaite and the youngest Hope brother.

Exactly a week ago the Windies were losing 19 wickets in a day at Edgbaston, careering to a calamitous three-day defeat.

Their response, with the ball on day one and during a redoubtable fourth-wicket stand here, has been one of true fortitude, not least from Hope – who averaged 18 with just one half-century from his previous 21 innings.

“It was good to get the monkey off my back,” he told Sky Sports. “I felt the pressure. As a professional you want to perform to your best.

“We are not coming here to let people run over us.”

Reflecting on the shift in fortunes from the previous Test, Brathwaite added: “Looking in the mirror at ourselves, looking at that game, we knew we could do better. As a team we decided we won’t give up and just work twice as hard.

“It was very important for us. We know what we can do, so it was important to show fight and believe in ourselves. That’s what we did.”