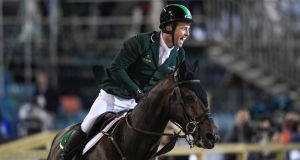 Cian O’Connor celebrates after riding a clear round on his horse Good Luck to help Ireland win the team show jumping event at the Longines FEI European Championships at Ullevi Stadium in Gothenburg, Sweden on Friday night. Photograph: Pontus Lundahl/EPA

With the decision taken not to start Bertram Allen and Hector van d’Abdijhoeve following their elimination on Thursday afternoon, Ireland went into the final stage of the team competition knowing they would have no discard score.

Cork-born Shane Sweetnam was first of the remaining trio to jump and, for much of the competition, he was in the lead individually with his own and Spy Coast Farm’s 11-year-old Chacco stallion Chaqui Z. It was only in the later stages that he was overtaken, first by Switzerland’s Martin Fuchs on Clooney 51 and then, by the last to go, Sweden’s Peder Fredricson with H&M All In.

The host nation Sweden, who led following Thursday’s first round, and Switzerland, who were in second overnight, took silver and bronze on 18.21 and 20.15 points respectively.