Jack Pierse among the early leaders in East of Ireland 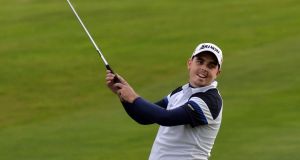 Alan Lowry (Esker Hills) is in a share of the first round lead at the East of Ireland at Baltray. Photograph: Pat Cashman

Portmarnock’s Jack Pierse admitted it would be a dream come true if he could bounce back from defeat in the final of the “West” and claim the East of Ireland Championship at County Louth on Monday.

The 26-year-old accountant took advantage of fine early conditions and posted a rollercoaster, three-under par 69 on in a fresh southerly breeze at the pristine Baltray links to join Esker Hills’ Alan Lowry, Laytown and Bettystown’s David Foy and Dun Laoghaire’s Colin Woodroofe in a share of first round lead.

“It would make up for Rosses Point –absolutely,” beamed Pierse, who made a 10-footer for birdie at the first, rolled in an eight-footer for eagle at the second and then birdied the fourth to get to four-under par.

“There’s a very long way to go but a win anywhere would be great. And I love the course. It fits my eye because you feel you can birdie every hole, providing you put it in position off the tee.”

Pierse confessed that he “lost it a bit” in the middle of the round, sandwiching a four-putt double bogey six at the 10th between three-putt bogeys at the eighth and 11th before rediscovering his putting touch to make birdies at the 14th, 16th and 18th coming home.

Defending champion Paul O’Hanlon was on course to open up a big lead when he raced to five-under par after six holes. But he lipped out from eight feet for another birdie at the seventh and confessed that mental errors cost him as he let his sensational start slip away.

After following four successive birdies from the first with another at the par-five sixth, former professional O’Hanlon bogeyed the eighth, 10th, 13th and 16th as the wind freshened for the afternoon starters, carding a one-under 71 to end the day in a 14-man logjam for ninth place with the likes of 16-year-old Kilkenny star Mark Power.

“It was a dream start,” said the Kildare native, who found three fairway bunkers coming home. “I’m five under after six and thinking, ‘What’s going on here?’ But I made two or three mental errors that were a bit unlike me after that and my putter went a little cold.

“It could have been a great day but I’ll take it. I just love this place, and I’m really looking forward to tomorrow.”