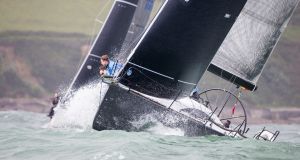 As the first of two Irish Sailing All-Ireland Sailing Championships gets under way this weekend, the senior event at Lough Ree Yacht Club will have a slightly varied line-up of nominees compared to previous years.

While both the junior event – this weekend at the Royal St George YC in Dún Laoghaire – and senior events rely on classes and ISA-affiliated organisations nominating their respective national champions and/or a mix of significant achievers, the largest sub-section of the sport in Ireland did not hold a national championship in 2018.

The Irish Cruiser Racing Association (ICRA) annual championships was scheduled for Galway last month but was cancelled towards the end of the fixture with no races held, due to a mixture of weather and dock access issues in the Port of Galway.

However, ICRA nominees are still included in the Senior All-Irelands next week.

But the situation is a spin-off of what can, arguably be regarded as ICRA’s annus horribilis that brought internal divisions to the fore, chiefly centred on the staging of the 2018 championships.

It is a year that incoming ICRA commodore Richard Colwell is determined to leave behind, and he plans to re-invigorate the organisation that is effectively the representative body for an estimated 7,000-plus regular sailors around Ireland based on around 400 crewed racing yachts.

The postponed annual conference, first scheduled to be held in February, then slated for early autumn and now confirmed for Saturday November 3rd at Lough Derg Yacht Club will see a new constitution launched.

Already, next year’s annual championships have been announced for the Royal St George Yacht Club in Dún Laoghaire, at the centre of the estimated 60 per cent of participating boats for June 7th-9th 2019.

However, the early season fixture re-ignites another previous debate for the championships as the main sailing season is front-loaded with established regular events on fixed dates such as the Sovereigns Cup in Kinsale and Volvo Dún Laoghaire Regatta amongst others.

Up to four major events will occur within a five-week period, prompting concerns that all events will suffer as the sport and individual boat-owners struggle to fill crew places on a regular basis.

It’s a concern that Colwell recognises, but he maintains that the ICRA championship, held over three days including a weekend, only requires crew to relinquish one day of work leave.

Other events have similar commitment requirements and, in total, the impact on crew leave requirements is minimal, he reckons.

Or, put another way, people finding time off work isn’t the cause of the crewing issue in present-day sailing.

Colwell points to regular surveys of ICRA members that clearly support holding an early annual championships, with poor demand for an August or September fixture due to family holiday, back-to-school demands and home clubs series for many people.

“Are you seriously telling me that other events will be affected by ICRA holding a three-day event early in the season? They’re being a little bit precious about that,” Colwell told The Irish Times. “We looked at the best ways to maximise the event – clearly, they (the ICRA owners) told us that they don’t want the event too late or too early in the year. There’s reasoning behind all the decisions – you have to respect their views.”

Aside from the annual championships, Colwell intends to pursue ICRA’s previous agenda to improve access to the sport and increase crew participation to address one of the biggest challenges facing the sport.