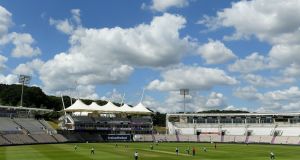 The Ireland cricket team are presently in a bio-secure environment within a hotel at the Ageas Bowl in Southampton, where they will play England in three One Day Internationals. Photograph: Stu Forster/PA Wire

Last Saturday, members of the Ireland men’s cricket team departed Dublin on a special charter flight to Southampton, where on arrival they were transported in bio-secure buses to a hotel within the grounds of the Ageas Bowl, the home of Hampshire cricket, ahead of their three-match World Cup Super League One-Day International series against England, starting next Thursday.

As with any elite sport, the bubble they already operate in will now operate within another bubble, as they remain sealed in that bio-secure environment before their departure on August 5th, the day after the third and final match, all of which will be played before zero spectators.

After that, on their arrival back in Dublin, the team and backroom staff will be required to self-isolate for 14 days, as per the latest international travel guidelines announced by the Government on Tuesday. Unless they arrive back via Northern Ireland, then travel back over the border, after which they will be free to do whatever they want.

As the first sporting body officially back on the international sporting stage, Cricket Ireland is also operating in a sort of test tube. There is still no clear advice as to what happens to the first bubble if the second bubble bursts, or indeed vice versa, and that need to self-isolate for 14 days, on their return, essentially counts for nothing if so easily circumvented.

Welcome to the bubble within the bubble of international sport; all part of the new normal, at least for now.

“Prior to the time the squad left, the expectation was that there would be 14 days of isolation on their return,” says Craig Easdown, media and communications manager with Cricket Ireland. “We still fully expect that, and in fact when we released the domestic interprovincial schedule the other day, we allowed for the fact the key internationals won’t be available for the 14 days, given the schedule, which is why it starts in late August.

“So that was the understanding, at the time of leaving, last Saturday. How that may change, or has changed, in light of the latest guidelines, we’re just not sure.”

Who really is? According to Easdown, Cricket Ireland haven’t been made aware of any plans to designate international sport as essential travel, or otherwise: they did however receive special dispensation to make these international travel arrangements in the first place.

“To get to travel to these games in the first place, we did seek approval. From the Government in the Republic, and from the Northern Ireland Executive as well. So we got the approval to travel, from both, because half the squad are based in the North,

“There may be some variation on the advice we get from the North, as well. At the moment, those who fly into Belfast, can travel into the Republic. Which sounds a bit crazy. In terms of sport anyway, the Republic and the North were going hand in hand for a while, and in the last six weeks of so have been dealing in different timeframes.

“So now, we can have club cricket in the South where you have crowds of up to 200 people, and no crowds at all in the North. We have the same protocols in place, but there is also that variation there.”

The notion of making international sport some sort of exception or exemption from the travel guidelines is not something being actively sought by Sport Ireland: it’s a decision for the National Public Health Emergency Team (NPHET), the Health Service Executive (HSE), the Department of Sport, and ultimately the Government itself.

“The situation is evolving all the time, and it’s very hard to predict what might happen in September and October, when we’re still in July,” said a spokesperson for Sport Ireland.

“At the moment, all the big organisations are looking at what happened in the Bundesliga, the Premiership, and how safe it is. Most of the international sport is still a few weeks away, yet, but if those things do need to be done, I’m sure they will be done.”

For now, however, that doesn’t necessarily mean designating international sport as essential: “I don’t think we’re there yet,” said the spokesperson. “Given the dire situation we were in, sport has already progressed quite a bit, and I think collectively, in terms of the safe return protocols, have done quite well.

“Ultimately it will come from the Cabinet, that’s how the process goes. Around travel, things are likely to change. We simply don’t know where the situation will be in five or six weeks, and whether something like a European football qualifier will be considered significant enough.”

Under the current guidelines, anyone returning from a non green list country will have to self isolation for 14 days, which means “staying at home and avoiding contact with other people and social situations as much as possible “while not using any public transport or visiting a shop unless absolutely necessary, and wear a face covering if you do”.

Several other sporting bodies will be closely watching Cricket Ireland’s return to the international stage next week, not least the FAI, who are still awaiting clearance from the Government for a quarantine derogation for their international team between the upcoming Uefa Nations League fixtures, starting against Bulgaria in Sofia on September 3rd followed by the visit of Finland to the Aviva Stadium three days later.

As Bulgaria is not among the 15-nation green list published on Tuesday, new Ireland manager Stephen Kenny would be also subjected to that 14-day self isolation on their return, which is unlikely to sit as well as it does with Cricket Ireland, given the different schedules.

Likewise with the IRFU, who for now appear both hopeful and confident that even without Britain and France on the green list, they will be able to complete their Pro14, Champions Cup and Six Nations from the end of August through to the end of October. The expectation there is that the respective unions and federations, and tournament organisers, will request special dispensation regarding government isolation or quarantine guidelines for professional sport.

1 Rory McIlroy puts integrity ahead of glory in US PGA second round
2 Frustration for Lowry and McIlroy as Li leads at US PGA
3 Michael Walker: Pressure mounts on Barcelona to stop slide
4 Sporting Cathedrals: Semple Stadium, the very centre of the hurling universe
5 Sligo meeting abandoned after four races due to safety concerns
Real news has value SUBSCRIBE