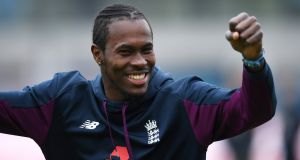 England’s Jofra Archer is set to play in the third Test against the West Indies at Old Trafford. Photograph: Gareth Copley/Getty Images

England captain Joe Root is confident that Jofra Archer will be ready to play in the third Test against the West Indies but said there was a question mark over Ben Stokes’s ability to bowl.

Root said that Archer, who was dropped from the second Test after he breached the bio-secure bubble, had been fired up in the nets and in good spirits as England prepared for the decisive encounter at Old Trafford, which starts on Friday.

Yet Stokes was struggling with stiffness after his heroic exertions in helping England win the second Test.

Root said that while Stokes would play, he might not be able to contribute much with the ball.

Root also hit out at the racist abuse that Archer has faced on social media, telling a news conference on Thursday he had seen some of it and it was “disgusting”.

Stokes has been struggling with a quadriceps injury and will be assessed before Friday’s start of play.

There was no chance of him missing the match, insisted Root, but any doubt about his ability to bowl would influence team selection.

“He spent much of the last Test on the field, but it does take a lot to keep him down and out of the action,” Root said.

“We’ll see how he is in the morning but if you look at our squad we’ve got a lot of brilliant options to choose from. Whatever combination we go with is obviously capable of taking 20 wickets.”

England have used six bowlers over the first two Tests and are expected to rotate again as they seek to keep them fresh with three more Tests against Pakistan to come in quick succession.

That means a possible return for Archer after he sat out the second Test.

His participation in the third Test had been in doubt as he admitted that he was struggling mentally after being racially abused on social media for having to spend five days in isolation as a result of stepping out of the bio-secure environment.

Yet Root said Archer had looked sharp in training.

“He’s got his smile back and bowled speed and line in some spicy nets over the last two days, which wasn’t much fun for our batters.

“But it was disgusting, actually, to see some of the abuse he’s had to put up with over the last week.

“As a squad we’ve tried to get around him and make sure he knows we are all there for him because no one should have to deal with that. It’s deeply disappointing and there’s no other word than disgusting.”