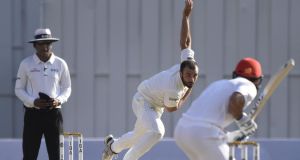 Ireland bowler Stuart Thompson in action during the Test match against Afghanistan in Dehradun, India. Photograph:

Rahmat Shah missed out on becoming Afghanistan’s first Test centurion by two runs but his innings deepened Ireland’s predicament on the second day in Dehradun, India.

Afghanistan’s number three chopped Tim Murtagh on to his stumps on 98, ending a knock that contained 15 fours and included a 130-run stand with Hashmatullah Shahidi which put their side in the ascendancy.

Shahidi (61) and captain Asghar Afghan (67) contributed half-centuries, the latter thumping four sixes, to help Afghanistan to 314 all out and a first-innings lead of 142 in this one-off Test.

Stuart Thompson (three for 28) was the pick of the bowlers while Andy McBrine ( two for 77), James Cameron-Dow (two for 94) and George Dockrell ( two for 63) took were among the wickets.

Ireland’s second innings got off to an inauspicious start as captain William Porterfield edged behind for a second-ball duck.

Paul Stirling and Andy Balbirnie ensured there were no further losses as Ireland closed on 22 for one – still 120 short of making their opponents bat again.