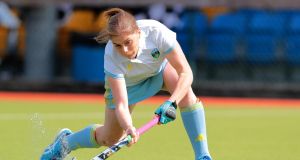 Katie Mullan: was on target for UCD in the 3-1 win over Trinity. Photograph: Paul Walsh/Inpho

They were made to work hard for both their victories over the weekend, but UCD finished up with another three Hockey League points that put them top of the table, and a place in the second round of the Irish Senior Cup.

But a beautifully taken goal by Sally Campbell from just inside the baseline set up a nervous final six minutes, pressure that was only relieved when Katie Mullan sealed the game for UCD from a penalty corner.

On to Sunday and they opened the defence of the Irish Senior Cup with a 4-1 win over UCC, but two of those goals came in the last four minutes, before then the holders struggling to find a way past UCC goalkeeper Kate Murphy who was largely responsible for the 0-0 half-time score.

Clodagh Moloney, though, quickly pulled one back for the Munster side but their push for an equaliser was halted when Tice converted a stroke and Sorcha Clarke concluded the scoring three minutes from time.

Pegasus, meanwhile, had wildly contrasting games over the weekend, their failure to get past Irish goalkeeper Grace O’Flanagan resulting in a scoreless draw with Railway Union in the HL, before they put 12 past Corinthian in the cup, Lucy McKee helping herself to a hat-trick.

Cork Harlequins had a similar weekend, drawing 1-1 with Ards in the HL on Saturday before cruising to a cup victory, beating Dungannon 7-1.

Old Alexandra also progressed in the cup with a 5-0 win over Banbridge, as did Lurgan who beat Trinity 2-0. Monkstown, meanwhile, suffered their third defeat in as many HL games, two goals in each half giving Pembroke Wanderers a 4-0 win on Saturday.

Philip Brown opened up with his fourth goal of the weekend to give Bann the perfect start to the weekend but Daniel Buser’s pair of goals turned things around. Alex Tinney’s equaliser left the tie in the mix for a long while before ’Garvey summoned the late winner which puts them into the second round pot.

Elsewhere, there were no major cup upsets of note with Railway Union, Monkstown, Pembroke and Annadale all knocking out regional league sides to advance with something to spare.

On Saturday in the EY Hockey League, Glenanne were the story of the day as they made it three wins from three to head the table. They trailed national champions Three Rock Rovers 2-0 after 25 minutes at Grange Road after Peter Blakeney and Ben Walker strikes.

But, inspired by Eddie O’Malley, they turned things around with the striker notching two goals before Richard Couse lofted in a brilliant winner for a 3-2 success.

It announced the Glens as a potential dark horse for the league title as they look significantly stronger than the side that finished in the bottom half of the table last term.

The arrival of Iain Walker from YMCA and Richie Shaw back from Australia have been key additions in strengthening what was a thin squad last season.

Elsewhere, Garvey raced clear of Pembroke with a hat trick from Andy Williamson in the second half earning a 6-3 victory with Banbridge beat struggling Annadale 4-0. Railway remain without a point or a goal to their name as they fell 2-0 to Monkstown.