Equestrian: Ireland narrowly miss out on podium finish in Boekelo 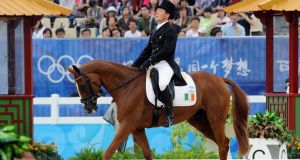 Ireland narrowly failed to finish on the podium at Boekelo in The Netherlands on Sunday following the show jumping phase of the three-star eventing Nations’ Cup competition which saw them complete on a penalty score of 207.20.

Of the Irish quartet, only England-based Austin O’Connor left all the poles intact with Kilpatrick Knight for a three-phase total of 66.50. The other counting scores of 70.20 and 70.50 were supplied by Sam Watson (Imperial Sky) and Declan Cullen (Seavaghan Ash) respectively while Michelle Kenny provided the discard score with RLE Aspe.

New Zealand took the honours on a total of 160.90 ahead of Germany (174.30) and Australia (203.70). In the 2017 FEI Nations’ Cup eventing series, of which this CCI competition was the final leg, Germany won the trophy ahead of Britain who only had one combination complete on Sunday.

On his second ride Ardagh Highlight (57 penalties), Watson finished best of the Irish individually in 13th place as New Zealand’s Tim Price topped the leaderboard with the Dutch Warmblood mare Cekatinka (43.70). Australia’s Chris Burton was the only rider to complete on his dressage score (52.10), moving up from 69th to eighth with the nine-year-old Irish Sport Horse gelding Cooley Lands.

One of nine riders to progress to the second round where he again went clear, Bourns and the nine-year-old Clover Flush bay stopped the clock in the jump-off on 42.76 as the USA’s Andrew Ramsay won the $130,000 class when home clear in 40.57.

Irish riders failed to add to their successes as the Horse of the Year Show came to a conclusion in Birmingham on Sunday night but the day’s two featured show jumping classes were won by British riders on Irish-bred horses.

In the late afternoon, Holly Smith partnered her own nine-year-old OBOS Quality 004 gelding Quality Old Joker to win the speed horse of the year title while crowned leading show jumper of the year was the Nigel Coupe-ridden Golvers Hill, a 14-year-old gelding by Ricardo Z.

Throughout the week there were many Irish-bred winners in the showing classes such as the racehorse to riding horse champion Beware Chalk Pit, the small show hunter of the year Ebony King and the Mountain and Moorland working hunter pony of the year Laburnum Richard.

Other title winners from the showing section included the champion show hunter View Point, the maxi cob of the year Jovian, the cob of the year Our Cashel Blue and the coloured horse/pony champion Doorleys Prince.