Irish cyclist completes his season’s goal with victory in Izmir 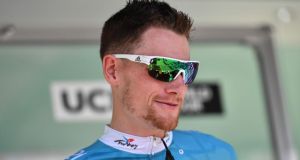 Sam Bennett continued his remarkable showing at this year’s Presidential Tour of Turkey on Saturday, speeding into the finish in Izmir ahead of Ahmet Orken (Turkish national team), Simone Consonni (UAE Team Emirates), Edward Theuns (Trek - Segafredo) and the rest of the main bunch.

The victory was his fourth stage win of the event and, significantly, his 10th success of the year. The Bora-hansgrohe sprinter had set reaching this number as one of his main season goals and achieving it will further boost his soaring confidence.

“Yesterday was so hard on every climb that I didn’t think I’d get over any of the climbs today,” he said, speaking of Saturday’s testing terrain. “[But] yesterday I didn’t have to go to the podium and do everything, so I had time for 10 hours sleep and I recovered as much as a I could. I had really bad legs yesterday. Today, they weren’t super but they weren’t as bad as yesterday. I got over the first climb and made the split, and I was okay, but then I had an acute case of crosswind paranoia.”

Bennett thanked his team-mates for helping him in the winds and on the climbs and, because of the saved energy, had enough left in his legs to stay with the rapidly-thinning main bunch on the final ascent.

“The beginning of the last climb wasn’t so steep; it went up in steps. The surface made a big difference. It was good, while on the first climb, the surface was completely dead.

“Then I looked down and suddenly there were 4km to go. I decided to really fight. It was 50-50 whether I went for the stage or saved energy for tomorrow. I saw Theuns was struggling – well, not struggling, but fighting also – and that was good for the morale.”

Bennett explained the fine details of how the finale played out. “In the end, the sprint was aggressive. Trek went on the left, I was on the right, I was clipping the legs of the barriers and nearly went down. I managed to get through. The last 500 metres went so quick and I didn’t see the 200m to go, I only saw the 100m to go. The moment passed for Theuns to get out. He was blocked behind his lead out man who should have forced me wider. In the end, when I put down the power, it was still the same, so I think for future reference I should have more self belief, and just go at the right moment.”

The Carrick-on-Suir native expressed delight with the win and also with reaching the numerical target he had set for himself. “I got my 10 wins for the season. That’s always been a career goal, and it’s the first time I’ve ever achieved that. I’m very proud of that. I’m going to really enjoy this off season. I’m really happy.”

His success further reinforces his lead in the sprints classification. He has a seven point advantage over Theuns there, heading into Sunday’s final stage. That too is expected to finish in a sprint, and he believes it may be possible to land his fifth win out of the race’s six stages.