UCD bounce back with big win – but Monkstown lose again 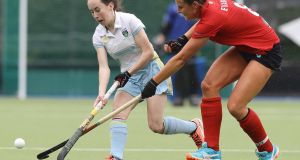 Abbie Russell: was on target for UCD in the big win over Belfast Harlequins. Photograph: Lorraine O’Sullivan:/Inpho

UCD bounced back in some style from their opening day Hockey League defeat by putting six past Belfast Harlequins at Belfield on Saturday, three goals in each half getting the defending champions’ campaign up and running.

Zoe Wilson pulled one back for Harlequins just before the break, but further scores from Anna Richardson, Deirdre Duke and Abbie Russell sealed an impressive win for the students over a side that had beaten Monkstown the previous weekend.

Cork Harlequins failed to follow up their victory over UCD with another win, but having trailed to Pegasus at Farmers Cross, Alex Speers scoring from a penalty corner late in the third quarter, they’ll have been content with their draw, Naomi Carroll levelling eight minutes from time.

Trinity, meanwhile, marked their first home Hockey League game with a 2-1 win over Pembroke Wanderers, Erika Markey and Sally Campbell putting them two up by half-time before Eanna Horan got one back for Pembroke in the third quarter to set up a nervy ending.

And up north, Ards and Railway Union shared the points, Chloe Brown equalising for the hosts after Kate Lloyd had give Railway the lead.

Sunday’s sole game saw Monkstown beaten again, this time Loreto enjoying a comprehensive 4-0 victory with Mia Jennings, Niamh Small, Ali Meeke and Siofra O’Brien getting their scores. That win puts Loreto on four points at the top with Pegasus, Ards and Cork Harlequins, while Monkstown and Pembroke are yet to pick up a point.