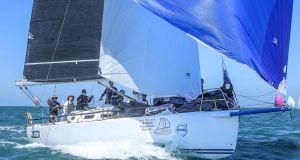 Kenny Rumball skippering the J109 Jedi at the start of June’s Round Ireland Race. The recovery of a man overboard from the yacht at night during the 700-mile race led to a Royal Ocean Racing Club (RORC) Seamanship Trophy. Photo: David O’Brien

Key Irish sailing events are reporting buoyant entries for 2019 with early take-up at Ireland’s biggest regatta up as much as 70 per cent for July’s biennial on Dublin Bay.

On the south coast of England, entries for 340 Fastnet Race places were snapped up in under five minutes this week.

With over six months to the first gun of the eighth edition of Volvo Dun Laoghaire Regatta, 228 entries were received by the close of its early bird entry deadline of 31st December; almost an additional 100 additional boats entered ahead of the same time in 2017.

Fifty-eight yacht clubs rare currently represented from the Channel Islands, Isle of Man, UK, Scotland, Wales, Northern Ireland as well as national and local race boats. It augurs well for a repeat of 2009, when Dun Laoghaire had its biggest ever entry, with 450 boats in the 22 class regatta.

After the entry for the Royal Ocean Racing Club’s (RORC) flagship event was opened this week the 340 available places for boats in the IRC fleet were all taken within just four minutes and 37 seconds. This was only 13 seconds outside the record time recorded in 2017.

This strong entry shows that the change of date has made little impression on the desire to compete in the race that takes place along the south-west coast to the famous turning mark.

The start date was moved to Saturday, August 3rd and for the first time in its 48-year-history it will be setting off before Cowes Week (rather than on the traditional Sunday immediately after it).

One yacht that may not be competing in Dun Laoghaire, however, is the Irish Championship winning J109, Juggerknot. Andrew Algeo’s championship boat is on the market this week at €99,000, so the ultra-competitive IRC one boat may well be sold out of the Bay prior to July’s event.

The exploits of another Dublin J109 will be examined at Wicklow Sailing Club on Saturday night when Jedi skipper Kenny Rumball, also from Dun Laoghaire, recounts the story of how he recovered a man overboard during last July’s Round Ireland Race.

Co-skipper Michael Boyd and Rumball received the Royal Ocean Racing Club’s (RORC) Seamanship Trophy last November following the rescue that was completed in the dark in big seas when the man was recovered safely within a couple of minutes.

The RORC citation read ‘Very impressive; the outcome could easily have been very different’. Rumball promises the full story at WSC at 6pm together with a flare demonstration at the South Quay in Wicklow. There’s a further talk at the Royal Irish Yacht Club in Dun Laoghaire at 1930hrs on February 7th.

A new “battle of the classes” trophy was won by the Laser 4.7 team of Adam Walsh, Harry Pritchard and Stephen Cunnane ahead of the Optimist team of Sam Ledoux, Peter Williams and Killian Reidy.

New funding has been approved by Cabinet this week for young people with disabilities and from disadvantaged backgrounds to have opportunities to embark on tall ship training voyages.

It’s believed that the new initiative would benefit young people many of whom have been referred to the sailing charity by judges, Garda, Tusla and other groups working with vulnerable and disadvantaged children.