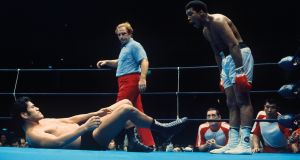 Following his conviction for white slave trafficking (he had driven over state lines with a woman in his car) in Illinois, Jack Johnson fled to Paris in 1913. Struggling for cash, the beleaguered world heavyweight champion turned his hand to fighting wrestlers at Nouveau Cirque in Montmarte. His contests with the Great Uhrbach from Germany, Scotland’s Jemmy Esson and France’s Andre Sproul were largely scripted affairs, and when the true degree of choreography became apparent to paying punters, they hurled tomatoes, rotten fruit and eggs at the combatants. One of the tawdrier episodes in Johnson’s remarkable life.

Sixty-three years later, Muhammad Ali squared up to Japanese grappler Antonio Inoki at Tokyo’s Nippon Budokan under a set of compromise rules. Billed, inevitably, as “the bout of the century”, Inoki spent the entire fight on the canvas, launching so many kicks that Ali eventually developed blood clots in his legs. The reigning heavyweight champion landed just six punches over 15 turgid rounds during which he repeatedly berated his prone opponent, imploring him to get to his feet. The whole sorry farrago culminated in 14,000 irate Japanese fans throwing rubbish at both men. History would remember it as the most ignominious fiasco of Ali’s career.

As more and more hot air is pumped into the possibility of Conor McGregor taking on Floyd Mayweather in some sort of hybrid bout, it is well to remember boxing has a tradition of its finest practitioners degrading themselves in these sort of debacles. If Johnson was the first and Ali the most famous, the list of others is lengthy and embarrassing.

Leon Spinks followed in Ali’s footsteps in taking on Inoki. Trevor Berbick lasted one pathetic round with Nobuhiko Takada, a mixed martial arts pioneer, in 1991. Most spectacularly, Andre the Giant toyed with Chuck Wepner for three rounds at Shea Stadium in 1976 until one insolent smack to the face made the French behemoth so angry he picked up the Bayonne Bleeder and flung him over the ropes. The latter incident may also have inspired Rocky Balboa getting in the ring with Hulk Hogan in Rocky III.

In terms of protracted build-up, insufferable hype, extravagant financial boasting and nauseating trash-talk, the event most similar to the proposed McGregor-Mayweather showdown involved Jack Dempsey. Fresh off delivering boxing’s first million dollar gate in defending his heavyweight title against Georges Carpentier, Dempsey was called out by Ed “Strangler” Lewis, the pre-eminent wrestler of the 1920s. At a time when both sports enjoyed arguably their highest profiles, the prospect of a face-off between the pair in the “fight of the century” intrigued fans and excited promoters.

“There is one chance in a thousand that he might hit me with a punch hard enough to knock me out before I get hold of him but that is only one chance,” said Lewis. “I am sincere about the match and will put up $25,000 in real money to bet that I can beat him.”

Throughout 1922, both fighters, their managers and various consortiums trying to win the right to host the contest seemed bent on putting together “a mixed match” of 20 minutes duration. For all the bluster, it never came off and Dempsey was 45 when he finally did take on a wrestler. As he once threatened to do to Lewis, the superannuated champion brutalised the over-matched Cowboy Luttrell before knocking him unconscious in the second round of a bout some combat sports historians argue may have been the first instance of mixed martial arts. Others contend that, insipid as it was, the Ali-Inoki calamity was the true progenitor of what we now call UFC.

“Ali once confided in his longtime adviser and friend Gene Kilroy that fighting Inoki could lead to similar bouts in the future,” wrote Josh Gross in his excellent recent book ’Ali vs Inoki: The Forgotten Fight That Inspired Mixed Martial Arts and Launched Sports Entertainment’. “He was right…Their match inspired a generation of fighters and promoters to create MMA as we know it today.

“Several years after the bout, in the early 1980s, a group of promoters tried to create the first American MMA league in Pennsylvania. The attempt was short-lived as the state became the first to ban matches that mixed boxing with grappling. Meanwhile in Japan, disciples of Inoki sought to prove that wrestling and submissions could work in a real fight; they organised mixed fighting entities during the late 80s and early 90s.”

The American public was intrigued enough by the novelty of that particular clash to flock to see live broadcasts of it at theaters and stadia across the country. Today, pay-per-view and the money that can be made from it explains why, outlandish and ridiculous as it may have first sounded, McGregor and Mayweather remains a serious possibility. In a world where millions are willing to pay the WWE $70 to witness ersatz squabbling, a meeting of the two largest egos and consummate salesmen in combat sports, whatever the rules, has genuine box office potential.

“Why fight a wrestler and demean the boxing title in many people’s eyes?” a reporter asked Ali in Japan.

“Six million dollars, that’s why!” he replied, revealing he was earning the same purse he’d got for the Thrilla in Manila a year earlier.

Add a couple of zeros to that number to understand why McGregor-Mayweather might happen.