Both Irish boxers lose on split decisions in semi-finals 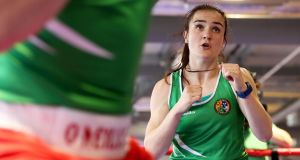 Ireland’s Kellie Harrington made her exit from the European Boxing Championships in Sofia on Monday with a bronze medal. Photo: Tommy Dickson

Split decisions went against Ireland, who had to settle for bronze medals in the semi-finals of the Women’s European Boxing Championships in Bulgaria on Monday.

Kellie Harrington made her exit early on Monday, the Dublin lightweight beaten in a 4-1 split decision by Mira Potkonen from Finland.

A few hours later Belfast featherweight Michaela Walsh also slipped out of the draw after a close bout with Russia’s Daria Abramova, again falling to a split decision from the five judges.

It gives the Irish team of three boxers two bronze medals for the Championships.

Walsh fought from a distance for most of her fight against Abramova until the third round when she began to mix it more and get into exchanges.

The Commonwealth Games finalist scored and moved well for most of the bout against an opponent who set herself and held the centre of the ring.

A big right connected with Walsh early in the third round although Walsh also landed flush with a left when her opponent turned. But there were shots going in from both sides.

Although the 25-year-old Irish boxer gave it everything for the closing half of the final round, Abramova gave back as much, just edging it in the end.

It was a good week’s work from the pair and their first medals at European Championship level.

Harrington was beaten by the Finnish boxer who beat Katie Taylor in the Rio Olympics in 2016, having moved down a weight division from light welterweight in recent years to compete in a weight category that is part of the Olympic programme for Tokyo.

Harrington was aggressive and came forward with the first round ending with both boxers on an equal footing.

Potkonen probably edged the second and third rounds in a busy contest with the judges finally going with a spilt on the winner with four of them favouring Potkonen and one Harrington.

Taylor still leads the Irish haul of European medals for women by some distance with an untouchable six titles in succession. Clare Grace, Christina Desmond, Harrington and Walsh have all won bronze medals.