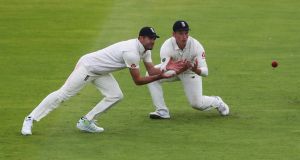 James Anderson of England catches Kemar Roach of the West Indies off the bowling of Ben Stokes as Tom Westley looks on during the first day of the third Test at Lord’s. Photograph: Naomi Baker/Getty Images

The run-drenched sunshine of Leeds was replaced by the devilish gloom of Lord’s, the glowering skies that have pace bowlers salivating, but still the cricket was captivating, fluctuating wildly. It was a bowler’s picnic. Fourteen wickets fell on the first day, the most at Lord’s since the Ashes Test of 2005, and each one had the balance of the match – and the series – juddering back and forth.

When West Indies were bowled out for 123 Headingley seemed like a mirage but when the players left the field for bad light – despite the blazing floodlights – England were 46 for four, which represented something of a recovery since their fourth wicket fell at 24. Both Alastair Cook and Joe Root have come and gone; more predictably so have Mark Stoneman and Tom Westley. So England will need another lower-order revival if they are to gain a first-innings lead. In the gloaming Dawid Malan and Ben Stokes at least hinted that this might be possible.

Perversely the sun only made an appearance at the toss, when Jason Holder opted to bat. Then under heavy cloud cover the West Indies were bundled out with a wine-dark Duke by England bowlers who enticed the ball to change direction as rapidly as a slalom skier. The chief destroyer of the tourists was Stokes, the invisible man on the fifth day at Headingley, who ruthlessly snatched career-best figures of six for 22.

The clatter of wickets had nothing to do with the fairy rings that have invaded the Lord’s square this autumn. It was a day when the ball swung deviously late in its flight path. In such conditions Jimmy Anderson would be expected to take more than two wickets, but that was all he finished with to the frustration of many who had come to celebrate and pay tribute.

At the start Anderson needed three wickets to reach 500 in Test cricket. Having dismissed Kraigg Brathwaite and Kyle Hope early on there was every chance that one of the West Indies tailenders would have the privilege of being in the picture that would bedeck the morning papers. But it was not to be. Devendra Bishoo, marooned at Anderson’s end, played and missed ball after ball while at the other end Stokes ruthlessly polished off the tail by taking three wickets in six deliveries just after tea.

No doubt Stokes was as mystified at being ignored for so long at Headingley where he bowled just five overs in the West Indies second innings. Here it was impossible for Root to take the ball out of his hands. It soon became apparent that the ball was swinging for him and after some reconnaissance Stokes got his line and length right. He bowled full, crucially fuller than Anderson, because the ball was swinging so much and this helped him to grab five of the last six wickets.

As at Headingley he was only required to bowl one spell but this one lasted for 14.3 overs and was only interrupted by the tea interval. The force was with him and it may be than Root would not have been able to persuade him to relinquish the ball anyway. Wisely he did not try.

At the start the Headingley hangover continued for a while as Cook dropped Brathwaite again in Anderson’s second over. But this was not such a costly aberration. Brathwaite only added seven more runs before edging to Jonny Bairstow. Soon after an astute piece of keeping disposed of Kyle Hope. This time the ball was heading for Cook after Hope had failed to remove his bat quickly enough and Bairstow took the precaution of diving to his right to take the catch in front of his fallible first slip.

There followed the solitary half-century stand of the day between Kieran Powell and Shai Hope, which was punctuated by several silky boundaries. Then Toby Roland-Jones struck twice from his favourite Pavilion End. Cook, to universal relief, held a catch – and he would take a better one later off Stokes – to dismiss Hope before the Middlesex seamer bowled Jermaine Blackwood, who was playing one of his typically extravagant shots at the time.

By now Stokes was swinging the ball dangerously. He gathered a dexterous caught and bowled chance in his follow through to dismiss Powell and then ran through the tail in a flash, aided by a superb diving catch at fourth slip by Anderson. Job done by Stokes except that soon he was taking guard with another rescue mission required.

Within 15 overs England were four down. Stoneman nibbled outside the off stump against Kemar Roach and was caught behind; Cook was soon defeated in the same way but by a better ball after Roach had switched to the Pavilion End. Then Holder intervened. Westley was lbw again.

Root correctly counselled against a review and then joined his colleague in the dressing room at the beginning of Holder’s next over when he edged to first slip, where Powell, who has also been fallible in that position, held the best catch of the day. Tormented batsmen are desperate for sunshine. There is not much of that expected on Friday.