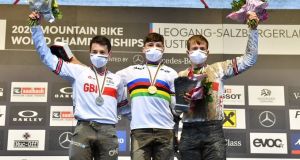 Producing “some of the most brutal downhill racing ever seen”, the course in Leogang demanded skill and patience and the 17-year-old from Limerick showed plenty of both: the central forest section – hitting 39 per cent downhill slopes in parts – a proper muddy challenge for riders in every class.

He produced a time of 4:02.142 on the 2.3km course early on, and watched as each rider failed to better it, winning out from the British duo of Daniel Slack and James Elliot.

“I don’t think it has sunk in fully yet,” he said, “it’s a bit overwhelming right now. Everyone has been sending me messages and hoping that I do well and I know lots of people were watching at home.”

Meanwhile Sam Bennett’s first race since winning the green jersey in the Tour de France three weeks ago didn’t go to plan, as he was one of 73 riders, almost half the field, who didn’t finish the Gent-Wevelgem one-day classic in Belgium.

Conditions were certainly testing at times, with Trek-Segafredo’s Mads Pedersen, who finished second to Bennett on the final stage of the Tour in Paris, enjoying the first classic success of his career, winning a tight sprint, with Florian Sénéchal of Bennett’s team Deceuninck-QuickStep in second.