‘It takes a lot to say don’t follow your dream, even if it’s a mad one’ 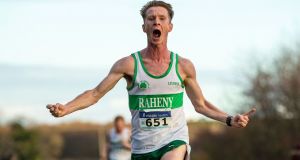 Sometimes the race is not won at the finish line, but in what it takes to get to the start line.

I met Kevin Dooney for a drink last weekend, and we agreed this would make a nice intro. A year after winning his first National Cross Country – the finish line marked by his own howling roar of inner approval and wider conquest – Dooney will be back on the start line this Sunday to defend that title. This is no small victory in itself.

Anyone in Abbotstown to witness his victory a year ago will recall that roar and wider conquest: it wasn’t just about Dooney tactically and physically out-duelling race favourite Sean Tobin, defeating him by a mere four seconds, adding to his National titles already won on the track and the road.

Or, in doing so, leading his club Raheny Shamrocks to a third successive team title, or indeed completing a sort of family sweep – his mother Greta Hickey a past silver medallist in the senior women, his father Roy Dooney also winning senior bronze back in his day.

There was definitely a lot let out in that roar. And highs like that are more animalistic, really

This was also about Dooney out-duelling and defeating his own inner demons, a self-triumph over the four-year battle with his own mental health, and an emotionally raw reminder of his unconditional love of distance running.

“It was, and still is, the best day I’ve ever had in athletics,” he tells me. “And I’ve been running a long time. I’d come sixth two years before, second the year before, so it’s not just that I was building towards it. I’d also spent a long time in the doldrums, before that, from the mental health side of things.

“And going into the race, I was told the gold medal was in the post to someone else, essentially. It was by no means a coronation. It was a real battle on the day.

“So it was the culmination of a lot of things. There was definitely a lot let out in that roar. And highs like that are more animalistic, really. But you can’t live in them either. So I probably needed that high to manage to come down. Because you can hold on to that high a little longer, that someday this year is going to see me right.”

That it’s November and Dooney is telling me this during men’s health awareness month is mostly coincidental; he’s not part of any campaign or charity awareness group and there’s no growing a moustache either, although he does recognise the enduring value in talking about it. It has unquestionably helped him, beginning six months before his victory last year with a blog he penned for the Fast Running website, under the headline “If I spark one conversation it was worth sharing”.

His own mental health descent came at a certain peak, four years earlier, while running and studying at Yale University and the hallowed surrounds of the Ivy League. Realising that “not talking about it helps nobody, so might as well try the other route” – and prompted by the suicide of his former Yale team-mate Hale Ross – Dooney made the conscious decision to let it all out. He’s equally conscious now not to let himself become defined by it.

I’ve some bad lows this past year, that still hurt, and ultimately I just want to be running

“People have reached out, thanked me for sharing. It’s a weird one, because I’m not trained to respond. I’m not good at dealing with other people’s mental health, I can barely deal with my own. I’m aware there’s a positive in talking about it, but there’s also a point you don’t want to talk about it. You don’t want it to be the sideshow, the depressed athlete. And that’s sometimes the trend with mental health, it’s always about that.

“The mental health side, that’s a constant. That doesn’t go away. I often say, ‘Am I in better position, in terms of my mental health, or am I really just smarter, more aware of what’s going on?’ And that’s a yeah, because I’ve some bad lows this past year, that still hurt, and ultimately I just want to be running.”

By that he means on the start and finish line, because this year has seen him fall short of both. He hasn’t raced since finishing a 5,000m on the track last May, a series of niggling injuries hampering even the smallest running high – and all this after a taking an extended leave of absence from his job at the Department of Communications, Climate Action and Environment to run “full-time” in an effort to reach his full potential, on the Olympic stage or otherwise.

“Not run professional,” he points out, “which would mean making money. I just never thought I’d be as injured. Everything is easy when you’re running well, I can bounce out of bed when I’m fit and healthy.

“At the same time, I didn’t want to be sitting here in another 10 years, aged 36, talking to you, wishing I’d gone full-time. If after two years it all blows up, and I’ve got worse, I can still put my hand on my heart and say I tried. It takes a lot to say don’t follow your dream, even if it’s a mad one. And I’m lucky to be surrounded by very supportive people.”

It did see me through a lot of the bad times. Jerry said to me this week, ‘you’re running pain-free’

By that he means his parents, his coach Jerry Kiernan, and his older brother Conor, also a Yale graduate, who has joined him on that “full-time” quest. Their training base since February has been the Dooney family holiday home in Dunmore East in Waterford, where the only level piece of training ground is the local GAA field. It wasn’t a practical move on several fronts, but they’re doing what they want to do and that’s good enough for now.

“And it did see me through a lot of the bad times. Jerry said to me this week, ‘you’re running pain-free,’ and if I’d been asked that question over the previous five months I’d have said something hurts. So getting to the start line has been a battle in itself. And you have to remember that. It always will turn. That’s battle number one. Battle number two will come again eventually.”

He’s also conscious of not allowing his running to become all-consuming. He’s started a Masters in Sports Psychology at Waterford Institute of Technology, and spent many a recent weekend supporting Cabinteely FC and their (near rise) from the League of Ireland First Division.

“I’m 26, it’s not a huge gamble. Maybe with the runner’s dream, it’s never really tangible. It’s more elusive, but there’s no stop to it. You’re always chasing the next one.”