Federer overpowers Berrettini in London to warm up for Djokovic clash 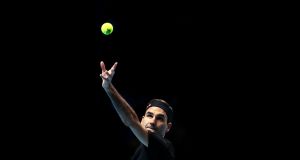 Roger Federer serves during his match against Matteo Berrettini during the ATP World Tour Finals at the O2 Arena in London. Photograph: Naomi Baker/Getty Images

Roger Federer warmed up for his hugely anticipated rematch with Novak Djokovic on Thursday by blunting the power of Matteo Berrettini on the third day of the ATP World Tour Finals in London. The young Italian, who scraped into the last eight at the last minute, could not live with a Federer playing near his peak to win 7-6 (2), 6-3.

On Thursday the stakes rise considerably. Djokovic, who opened his account brilliantly on Sunday, will suspect – but won’t say – that Federer might be carrying residual psychological damage after failing to convert two championship points against him in the Wimbledon final four months ago.

Federer says that is a buried issue. But he is happy to repair the damage of losing here in the first round. “It’s unusual to lose and come back again. I did it last year. There’s no reason to be too down on yourself. You come here to play three matches. I had a day off, and there are ways to get rid of that loss. I did it hanging out with my kids.”

Last year, Federer fell to Kei Nishikori and bounced back to beat Dominic Thiem, who got the better of him on Sunday night. However, seven times in a row, Federer has beaten debutants in these finals. He has never lacked for ruthlessness.

Nevertheless, few recent second-round opponents after an early loss have been as dangerous an unknown quantity as Berrettini, who only last March was winning a Challenger event in Texas on the day Thiem was beating Federer in the final of the Indian Wells Masters. Certainly the 23-year-old Italian, playing his first ATP Finals, has improved since Federer walloped him in three quick sets at the start of this year’s Wimbledon.

Triangulation is a dangerous exercise in any sport, but Berrettini has been competitive in his three matches with Thiem, and beat him in two sets in the quarter-finals of the Shanghai Masters last month. There were early signs on Tuesday that Federer would have to play better than he did in losing to Thiem if he were to stay in the tournament, as he admitted on Sunday night. When Berrettini, at a career-high No 8 in the world, held to love to level at 4-4 in the first set, his self-belief soared.

For all his ambition, the last player to qualify for the tournament still had the challenge of quelling a legend hungry to add to his six titles. While Berrettini continued to crunch his ground strokes, Federer stayed characteristically calm, holding to love and getting to within a point of taking the set on the Italian’s booming serve (one of which reached 145mph).

Berrettini held under pressure, from 0-30 and a set point down, to force the tie-break after 37 minutes of quality struggle. Federer was bossing the shoot-out at 4-1 and was glad of a double-fault ahead of his final pair of serves. He aced for 6-2 and Berrettini netted a rash forehand to hand him the set.

The match was Federer’s to lose, and he looked in no mood to do so. He had soaked up Berrettini’s bombs in the first set and then set about returning the favour, breaking to love at the start of the second with nagging precision. While a love hold for 1-2 with his fifth ace lifted Berrettini’s spirits, he was doing well to stay in touch as Federer struck a vein of inspired hitting off the ground, from deep and at the net. He suddenly had occupied another zone, known only to the very best.

Berrettini’s accuracy faded under pressure. Federer took nothing for granted, though, and showed his willingness to fight with a remarkable chase and backhand flick in the fifth game, even if it didn’t win the point.

He got a little sloppy as Berrettini scrapped for three break points in the eighth game but the Italian could not hold his shape and the moment passed when Federer held with a second-serve ace down the T.

Berrettini, having fought so well, let himself down with a poor service game, tired baseline shots going wide and long as Federer grabbed two match points. Berrettini saved one then dumped a weary forehand.

Before the match, Federer confirmed his own earlier hints that he might play for “another couple of years”. He turns 39 just after the 2020 Olympics and told the BBC, “The schedule so far is all the way up to the US Open next year. I had a meeting with the team. Obviously I’m going to play the Olympics, the French Open, US Open anyway, Australian Open, Indian Wells, Miami the whole thing for next year.

“I don’t ever go over a year ahead of time but, if I’m playing at the beginning next year I’m going to start thinking of 2021, which is great, if you think of that. I’ve had a few really good last seasons [since] I had the knee issues. I actually missed the World Tour Finals here. [But] I’ve been very healthy and, as long as the family is happy on the road as well, why not keep playing, if I feel that I’m competitive with the best as well.”

As he reminded Berrettini and any doubters for an hour and 18 minutes on Tuesday afternoon, Federer is going nowhere just yet. – Guardian